The Pistons vs. The Raptors: HoopsAddict.com and Need4Sheed

The Pistons take on The 35-35 Toronto Raptors tonight on the road. Detroit is 2-0 against the Raptors this season and has won three in a row and 10 of the last 12 meetings in the series. The Raptors, who have lost eight of their last 10, falling to 7th in the East. If the playoffs were to start today, The Pistons first round matchup would be with Toronto.

I got together with Ryan McNeill of HoopsAddict.com for tonight’s matchup and we exchanged a few questions with each other on The Pistons and Raptors.

How is Carlos Delfino doing for the Raptors. Pistons fans had high hopes for the flying Argentine, but things just didn’t work out here. Has he lived up to expectations or surpassed them?

HoopsAddict.com: ‘Los is a tough player to read. There will be stretches of games where I wonder why Sam Mitchell doesn’t put him in the starting line-up and then he’ll follow that up with another stretch of games where he seems allergic to the paint and has trouble scoring. However, even with that being said, I don’t know where the team would be without. He’s played every game this season and he’s been one of the key players off the bench for us. Because I had tempered expectations about him entering this season I would have to say he’s easily surpassed what I expected from him. 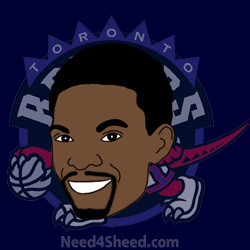 Who should Detroit be concerned with matchup wise besides Chris Bosh in Wednesday night’s game?

HoopsAddict.com: It’s a toss-up between Jamario Moon and Jose Calderon. Moon has posted three-straight game with double digits rebound totals while Calderon has been the MVP of our team this season due to injuries to Chris Bosh and T.J Ford. Look for Moon to post a double-double while frustrating Tayshaun Prince. Also, as strong as Chauncey Billups has played for Detroit this season, look for Calderon to show why he was being talked about as a potential All-Star this season. He doesn’t force shots, he gets his teammates open looks and he rarely turns the ball over.

Toronto really has to step things up in the final games of the season to assure them a playoff spot. What is the most important thing that needs to happen on court to get them into the post season? Will the fact that Chris Bosh has called his team help their chances?

HoopsAddict.com: While there’s frustration in the Raptors locker room and among fans, it’s clear Toronto doesn’t have a lot to worry about. Every NBA teams goes through a rough patch of 10 games each season where things just don’t click. Unfortunately for the Raptors it happened near the end of the season thanks to the loss of Bosh for 10 games and a nasty five game road trip. I don’t think Bosh venting the media will make as big of a difference as his return to the court will make.

The Raptors started off the season pretty strong, but have not been playing well since the all star break, what went wrong?

HoopsAddict.com: Simply put, an injury to Chris Bosh went wrong. Before he missed 10 games he was playing like one of the top players in the NBA while averaging 30 points and 10 rebounds for a solid stretch of games. Then, without him in the line-up the team had to endure a gruelling five-game west coast trip and with Washington and Philly playing some great ball we’ve slid in the standings. Raptors fans aren’t worried as 9 of our final 12 games come against teams with records below .500 so with a healthy Bosh back we’ll be able to soar back up the standings. Besides, Raptors fans have long wanted a match-up against Orlando in the first round so we’re hoping to end up as the sixth seed in the playoffs and avoid Cleveland or Washington.

Lastly, how’s our mutual friend Primoz Brezec been doing since he joined the team? Do you expect the Raps to resign him? And is he still the king of uniform accessories?

HoopsAddict.com: I have one word to describe Primoz Brezez: Gangsta’. Do I need to say more?

You can head on over to HoopsAddict.com for my answers to Ryan’s Pistons questions.

Tip off is at 7:00 PM and will be locally broadcast on FSN Detroit. If you can’t catch it on TV you can always tune in to 1130 AM WDFN The Fan or stream it live through your computer at NBA.com.

According to Chris McCosky “The Pistons’ magic number to clinch their sixth Central title in seven years is one (any combination of one win or one Cavaliers loss would clinch at least a tie).” Sounds good to me.

Leave ’em in the comments.