The Pistons vs. The Celtics

I get a lot of e-mail, some good some bad. I received this one after The Celtics beat The Pistons in Detroit. It’s neither good or bad, it’s just plain great. I though it would give you a chuckle before The Pistons take on the Celtics for the last time in the regular season.

This is from Daniel M(I won’t print his whole name)
How’s this for an email address? bostonthreeparty@—–.com. Here you have the unedited version.

“hi my friend showed me ur stupid website i am a boston celtics fan so i absolutley hate detroit rajon rondo is much better than chauncy ray allen is a better 3point shooter the rip an kevin garnett is so much better at power forward than antonio mcdyess. I am a tarheels fan and since sheed went there for college than i guess i like him but his attitude is still kinda like an asshole. all ur players are old and shud be retiring in bout the next 5 years. the celtics big three are all over 30 years old so i cant really be talking but they are still beasts at bball. pistons beat us the first time only by 2 points but we beat them the2 time by like 10 so we are better. plus we have more titles then detroit. hahahah please respond to my email. go celtics!!!!!!”

If that doesn’t put a smile on your face I don’t know what will. There you have it Daniel, this is me responding to your email. We all appreciate your opinion, good luck tonight. Now on with the important stuff.

The Celtics added PJ Brown and Sam Cassell to the mix, who won’t be playing tonight because of a death in the family, and as you already know by now The Pistons brought back Theo Ratliff. The season series is tied 1-1 so I guess you could say it’s winner take all. Boston hasn’t played a game since beating Atlanta on Sunday, while today is the second game of a back to back for The Pistons. Don’t think for one minute both teams don’t want this one. In fact Chauncey all but admitted it last night in his post game interview. 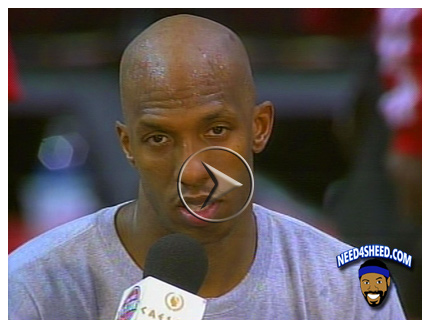 Tip off is at 7:30 and will be locally broadcast on myTV20 Detroit. If you can’t catch it on TV you can always tune in to 1130 AM WDFN The Fan or stream it live through your computer at NBA.com.

I’m sure the comments will be buzzing tonight. Here’s to Piston red, white and blue.