I headed out to The Palace Wednesday afternoon in one of the worst snowstorms to hit the area all winter. Under normal circumstances I might not have left the comforts of my home on such a day, but this trip to the Palace was extra special for me. I was going to meet the Winners of The Ultimate Pistons Fan Contest for the game and a whole lot more.

Unfortunately because of the weather a couple of the winners couldn’t quite make it all the way out to The Palace, especially considering they were coming from Canada and Muskegon. Now we all love the Pistons but risking your life to watch the The Heat game is another thing.

Once we all arrived safely, we set off for an a journey that none of us expected. I don’t know how many of you have been to The Palace and had a chance to soak in the Piston experience, but if you have you know just how special it can be. This my friends, spoiled anything short of another Championship for me.

The Pistons very own Dave Wieme, who has been with the Pistons organization since he was 15 years old, was our guide for the night. Let me just say this before I go on, The Pistons organization and Mr. Wieme went all out to make this one of the most memorable experience you could have as a Pistons fan. Not only is Dave a class act, but he’s known to be quite funny and write a mean blog. He even makes some pretty good videos too, but enough about Dave, he didn’t pay me enough to gush for more than a paragraph.

We entered though the Caesars suite level of the building, and while we went along on our tour we learned about the history of the building as well as seeing all the points and rooms of interest. Just steps away is the Pistons locker room, training room, media room….you get the picture. 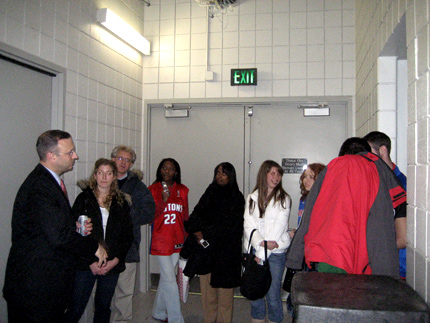 We even caught a quick glimpse of Primoz Brezec walking out of the locker room as he was heading for the court for warm ups. Next we went to the loading dock area where we got treated to The Spare Tires practicing their Soulja Boy routine. We learned the the loading dock is where everyone enters the building, the visiting team, the media, Flip Saunders and the players. Look isn’t that Antonio McDyess reporting for work? 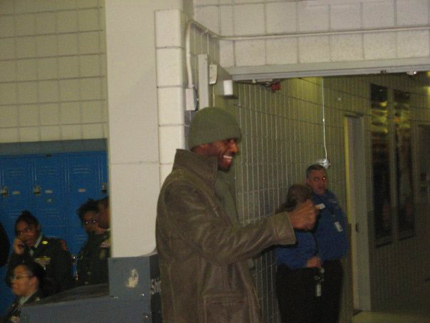 Have you ever wanted to walk out of the tunnel you always see the players got through? Here is a view from the other side. From there we walked down the hall where I was tempted to knock on the Heat’s locker room door to ask Dwyane Wade if Shaq was still in his Fave Five, but I didn’t think I could get past security, so it was off to the Key Bank Club and the Bunker Suites. Each distinctly different suite was nicer than the next and with the suits come some outstanding perks.

We then headed to the ultimate suite, owner Bill Davidson personal Palace. The center court double suite was not only luxurious, but he sure has a great view of all the action, even though you can usually catch him court side during the game. 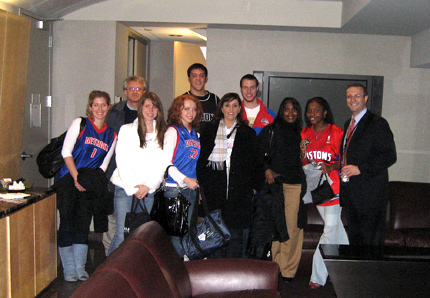 It’s good to be the man in charge. 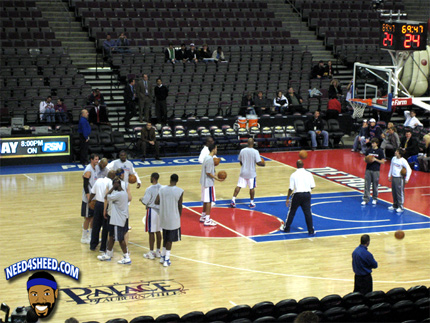 When you ask a Pistons fan if they want to get any closer to the action 11 times out of 10 your’re going to get an enthusiastic YES! So when Dave asked us we almost walked over each other towards the court where the Pistons were warming up. So there I stood about three feet away from Tayshaun Prince practicing his jump shots and this was the best picture I could get. 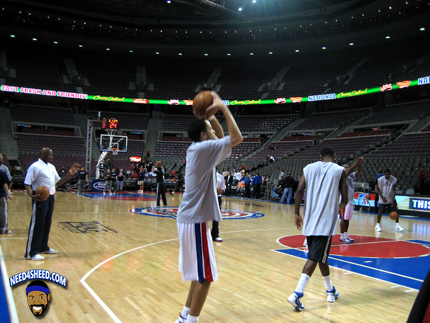 We hung out for more than a half an hour while the Pistons warmed up. When we weren’t getting our pictures taken we were the ones taking the pictures. Rip didn’t take his pre game shots until everyone else was back in the locker room. My guess is Rip was slowed by the snow. Some of us even got on court to take a shot or two.

It was then up to The Pistons.com suite to enjoy the game. Not only was the suite was stocked with food and drinks for everyone, but the winners were treated to souvenir jerseys. I had to make sure a Sheed cake was present, but before we cut into it I had Francesca take a picture with it since she inspired it. However the one she made to win the contest was much better. 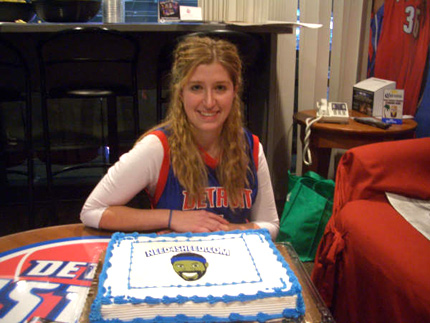 Even though the game didn’t go as planned (I called for a blowout), we were having the best time. It wasn’t the easiest game to watch, but we all had faith that the Pistons were going to pull it out. When Sheed started to step up his game and lead the Pistons to victory I got a text message from our Senior Member of Team Need4Sheed Steve.

“I think Sheed knows Team N4S is in the Palace tonight! He’s done
everything tonight. One board short of the DD. I’m sure you’re all enjoying
it.”

I think he did know.

As the third quarter finished we got a special visit in the Pistons.com suite. The 1989 Detroit Pistons Championship Trophy. Seriously, what could be better? 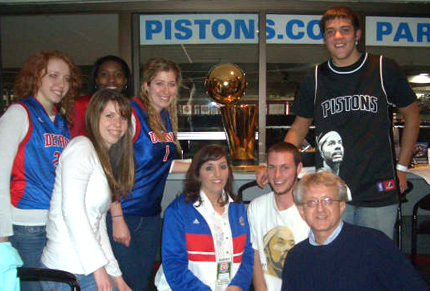 Now I don’t care how many times I have been close to the trophies, it’s always such a special event. And the fact that it was the first one just made it that much better.

We went back to watch the finish of the game and Dave rejoined us. Not only did we watch the Pistons put the game away, but we got a few great behind the scenes stories along the way. My favorite was Kandor related. Dave had injured his foot playing soccer a week earlier and enlisted the services of Arnie Kandor to get him on the fast track of healing. Ask Dave what it’s like to have Arnie work his magic? “It’s like walking into Hogwarts.“ Classic

The Pistons pulled out a win, but The Pistons organization did so much more for some diehard fans that really appreciated and were in awe of everything that they were treated to. The best part for me, being able to see the excitement on everyone’s faces as they witnessed things that most of us dream about. As a season ticket holder I may take getting to see my Pistons play for granted sometimes, but thanks to The Pistons Organization they have left me with a memory I will never forget. 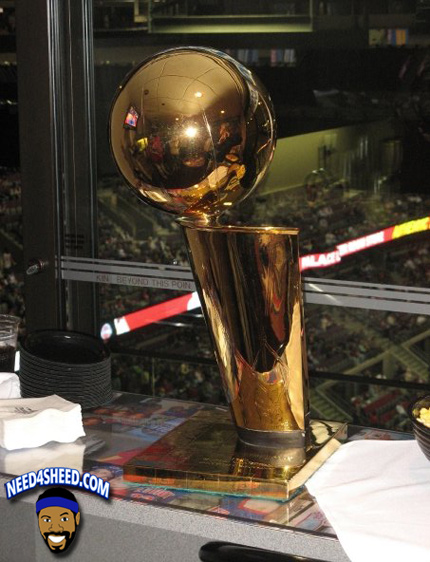