And The Winners are…….

Let me tell you that picking six winners for The Ultimate Pistons Fan Ticket Contest was a harder task than I anticipated. I myself am a huge Pistons fan, but I have never claimed to be the “Ultimate Fan,” so when I put the call out for them I didn’t really realize that Team Need4Sheed was really going to go all out. And they did….

Before I tell you who the winners are I would just like to let everyone know that I considered everyone’s entries and at one point or another in my decision making process each and every person had a shot at these tickets. Yes there were a few clear cut yes’s in the bunch, but for the most part every single one on the entries were ticket worthy, well except the one that said….”I want the tickets bad, give em to me!”
Here they are:

I really enjoyed everyone’s entries and I am sorry I didn’t have more tickets to give away. Honestly they were all great, but I just wanted to show you a couple that really stood out.

Now I have heard rumblings of this story, but honestly I thought it was just an urban legend. It’s been floating around Pistons circles for a while now that someone actually re-created a bit of the Pistons famous introductions during their wedding reception. Don’t believe it… I didn’t until I watched Ryan Fleming’s video.

Hats off to Ryan and his wife, that’s dedication.

If you remember the video I made to promote the contest we made a reference to baking a Sheed cake. Now that was just a funny off the cuff remark that Mike D. blurted out during taping that we loved and decided to keep in. Little did I know that Francesca Falchieri would actually get the mixer out and make this wonderful bit of goodness. 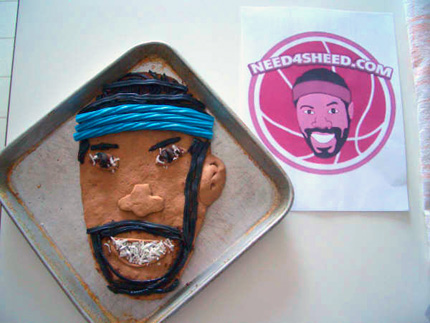 From what Francesca told me the hair and headband are made of licorice and the mouth is filled with coconut. Time consuming and creative, two tickets for you Francesca. 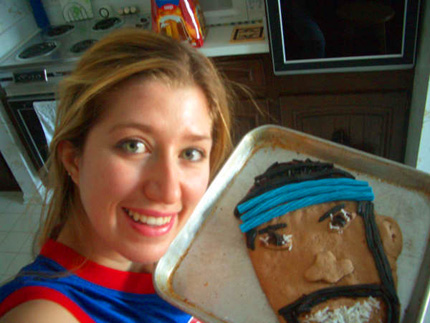 So that’s it, those are the big winners who will join me at the Palace February 6th to watch The Pistons take on The Miami Heat. I will contact the winners with the exact details as soon as they are made available to me by The Pistons. A Palace tour, a suite to watch the game, a little extra surprise from me and the company of some die hard Pistons fans. Now that’s SHEEDtastic!

Special Thanks go out to The Pistons Organization for making this possible.