Most of you weren’t around to remember the memorable playoff series in 1984 when the Pistons went up against the Knicks. What I do remember from way back in the early 80’s is that this was when the Pistons started to form their identity. Isiah was just starting to shine, we had Bill Laimbeer by his side along with Terry Tyler, John Long, Vinnie Johnson, Earl Cureton and always ready Kelly Tripucka.

Another thing that will always stick out from those times was that that Bernard King was “The Man” and anytime the Pistons went up against him it was a frighting thing. In my opinion King still doesn’t get the recognition he deserves today.

Here is one of the greatest performances by any Piston in a single playoff game. Isiah Thomas putting up 16 points in just 90 seconds. Keep your eyes out for the always dapper Chuck Daily, an exited and spirited George Blaha and a bare lipped Kelly Tripucka. Enjoy one of the most memorable Pistons performances of all time. 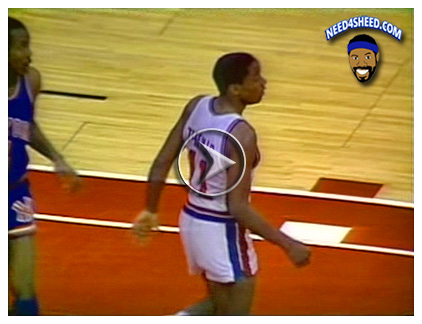