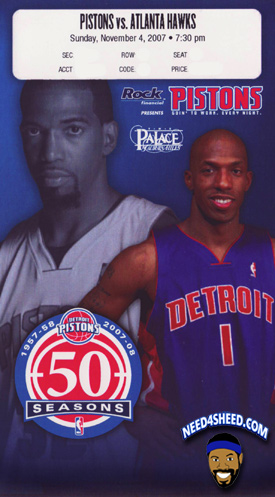 I’m getting ready to head out to the Palace for one of my favorite Nights of the year, the home opener. I actually had to cut short a wedding to make it to the game (shhhh… don’t tell).

The Pistons, plus new father Richard Hamilton will be taking on the Atlanta Hawks. Tip off is 7:30 but you can be sure that I will be in my seat well before the into’s start. I already did my spot on WTKG’s Sports Extra with Bennie and Jeff to get me pumped for tonights game.

Let’s hope the Pistons have a 3-and-0 record come morning. As always, I am leaving it to you in the comments.