“I still don’t think they (Cavaliers) beat us, we beat ourselves,” Wallace said. “And I think we also fell victim to that personal NBA thing where they are trying to make it a world game and get (television) ratings. They wanted to put their darling in there (the NBA Finals) and they did, and look what ended up happening.”

The league’s darling, according to Wallace, was LeBron James, and what ended up happening were the worst ratings in the modern history of the NBA Finals.

“This game ain’t basketball anymore, it’s entertainment,” Wallace said. “It’s starting to get like the WWF. There ain’t no real wrestling anymore either. It’s all fake.” 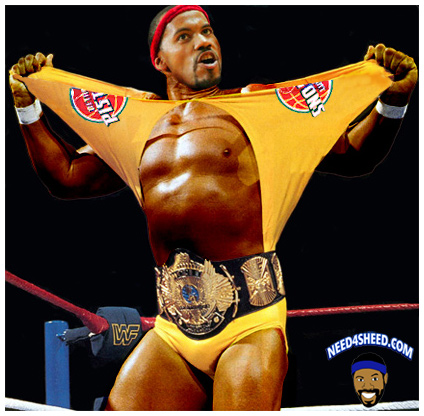 “We have a great game and it provides a lot of people–Rasheed and myself included–a very good living,” Stern said. “I think we all need to learn to be respectful of all that this game has brought and know that there are a lot of people who have worked extremely hard to bring us all to this place. I think Rasheed needs to think about that before he starts questioning things and making those kinds of statements.”

Via The Detroit News
Thanks to everyone on Team Need4Sheed for making sure I didn’t miss this quote.