It’s not every day that we get to meet our hero’s but Monday just so happened to be a day of dreams, and I got to wittiness it. The Pistons kicked off their Read to Achieve program at Children’s Hospital of Michigan and I was honored to get an invite from The Pistons organization to cover the event.

As I walked into Children’s Hospital I immediately saw The Pistons reading court full of children seated on the floor anxiously awaiting their idols. I was a little early, so I took my place and just observed everything that was going on around me. As the kids waited for Chauncey, Rasheed, Tayshaun, Jason Maxiel, Amir Johnson, Flip Murray, Rodney Stuckey, Jarvis Hayes, Ronald Dupree, Cheikh Samb, and Sammy Mejia, they were talking amongst themselves about how nervous they were and that they didn’t know what to do once the players were sitting amongst them.

When the players finally arrived, you could see the smiles for miles. The Pistons sat down in the reading court with the kids and a funny thing happened. I noticed that the roles were reversed and suddenly the Pistons looked a bit nervous in front of the kids.

After a quick ceremony the players were paired off in teams to visit the children who were unable to leave their hospital rooms. I was standing right next to someone from the Piston’s organization as Rasheed walked by us and I couldn’t help overhear him talking to the gentleman standing next to him about how great Sheed is with the kids, and how he always puts a smile on their faces no matter what kind of situation they are in. I had no one to share it with, so I silently smiled to myself. 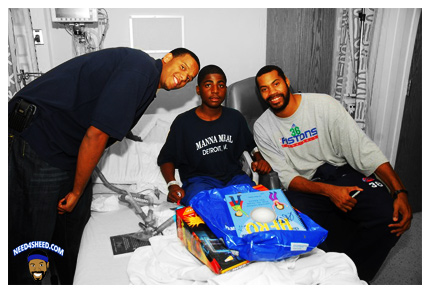 As most of the players went off to greet the kids, sign autographs and give them gifts, Rodney Stuckey and Nazr Mohammed stayed with the children downstairs and read to them. They read from a book called Hero as the children followed along. It was more of a question and answer workbook and as each page passed there was a question for the kids to answer and interact with Nazr and Rodney.

Now let me just say that Nazr had such a presence and way about him with the kids that I was pleasantly surprised. He not only made each child feel at ease, but he had them opening up to him like they had known him for years. He led the kids through each page of the book posing questions to them about who their hero’s were, who they admired and what were good qualities to have. When they were to reluctant to answer, he did it first, and then they followed. It was like he was born to do it.

A few things Nazr shared with the kids was that he thought the cell phone was one of the best and worst inventions ever, he likes to dip his French Fries in a mixture of ketchup and Miracle Whip, but if Miracle Whip is not available mayo will do, and that he considers his late father his hero.

Rondey Stuckey, on the other hand, shared just one thing with the kids that had everyone smiling. The question posed was “Who do we trust?” and with a big grin Stuckey answered, “My teammates,” and Nazr quickly replied “Good answer.” Even the children got a chuckle out of it. He even finished the reading with a resounding DEEEEETROIT BASKETBALL. He’s fitting right in. 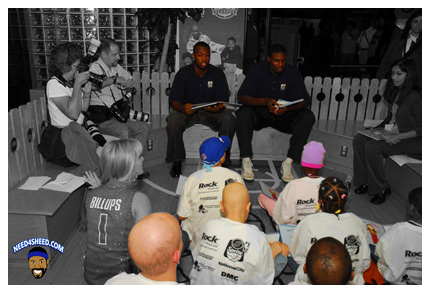 Nazr and Rodney, along with the rest of the team, posed for pictures, signed autographs and gave big hugs to the excited children. We get so much joy out of watching the Pistons on court, but to see them off it in a way we never have, is so much better. To see the smiles they brought to these courageous kids makes you appreciate what they do even more. We may consider The Pistons our hero’s on most days, but on this day, they let those kids know that they were the true hero’s, how special they are, and they are not alone in their fight.