I don’t know how many of you are familiar with The Minnesota Timberwolves Mark Madsen. Mark is a little used NBA Forward who has logged just over 5 thousand minutes in his seven years as a pro while averaging 2.3 points per game. Even though he doesn’t see much time, Madsen, a fan favorite, is a energy guy who gives it all he has when he’s on the court. He even has his own Blog that he updates regularly.

Madsen seems like a decent guy that wouldn’t hurt a fly, but I was reminded of one thing a couple of days ago while watching Fox Sports. Most white men can’t dance and Mr. Madsen the proves it in this VIDEO footage. Check out this video of Mark busting a move when his Lakers team won the NBA Championship. 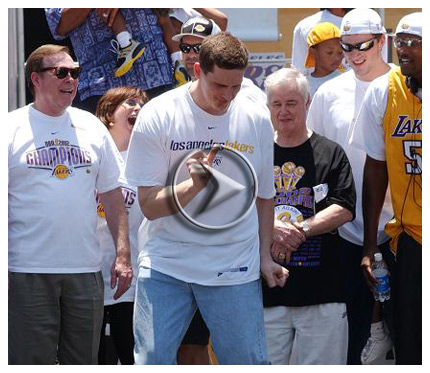 This one is a classic that I just can’t get enough of. If he were any more excited he just might explode.

If you have more evidence of the honest truth that most white men can’t dance, leave the links in the comments and let’s see who can come up with the best one. K-Fed videos don’t count, he’s in his own category.