Kevin Garnett is going to The Celtics for what seems to be their whole team. The Celtics will send Al Jefferson, Gerald Green, Theo Ratliff, Ryan Gomes, Sebastian Telfair, and two first-round picks to the Timberwolves for Garnett. Garnett gets the trade that he wants and Bostons trade their youth for a title run. Garnett, Peirce and Allen should do wonders for the Celtics, but I doubt they have enough on the bench to be true title contenders.

You can bet that they will become the new Eastern Conference darling, like the Bulls were last season after acquiring that other Wallace. I will tell you one thing, this is the first time since Larry Bird was in Boston that I am actually excited to see the Celtics play. 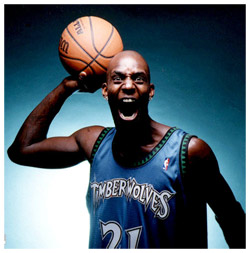