Billups – Pistons, Not a done deal 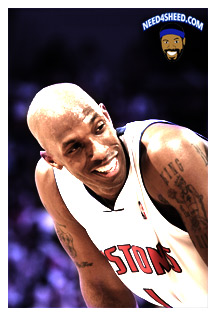 Did he or didn’t he sign? Pistons fans have been going back and forth to try to figure out just what happened with Chauncey Billups. We here told the deal from Chris McCosky of The Detroit News, but when Chauncey’s agent Andy Miller got wind of it he was less than happy.


“This is a vicious rumor,” Miller said. “It’s entirely untrue. We have not reached an agreement. I don’t know what stage we’re at. We’re having ongoing discussions, and I don’t believe that we’re on the verge of signing an agreement anytime today by any stretch of the imagination.”

McCosky then said this in his blog..

“At about 4 p.m. today, I reported on Detnews.com and WDFN that the Pistons and Chauncey Billups had agreed structurally to a five-year, $60 million offer. That has not changed, despite a lot of other media outlets’ attempts to discredit that report. That’s how this sickening business works sometimes.

I never said the deal was done. No deal can be officially done until Billups signs, and he can’t do that until July 11. Andy Miller, Billups’ agent, is furious with me and that bothers me. I have had a great working relationship with Andy and Chauncey and I want that to continue. I wasn’t trying to do harm to anybody. Announcing the structure of a five-year, $60 million deal didn’t sound to me like bad news for either one of them. It’s a great offer — by average annual salary the richest in Pistons’ history.

But Andy feels like the Pistons were trying to pressure him into a deal. That’s not remotely the case, but that’s how he feels. He was also angry that the news got out before he could talk to Chauncey. He tore into me and then categorically denied agreeing to any part of any kind of deal. That’s fine. Except, the structure of the deal is still in place and Billups has no other offer even close to bid against it. Are there important details to clean up? Of course. Are any of those details potentially deal-breaking? Don’t think so.

The Pistons are bidding against themselves for Billups. On Tuesday, they could have told Miller to go ahead and seek your best offer. The best he would have come back with, most likely, would have been a $9 million per year starting salary with the Bucks. But the Pistons didn’t do that. They made an offer that reflects both what he has done for the franchise the past five years and for what he means to the team going forward. Nothing about a five-year, $60 million offer is insulting. Nothing. And at the end of the day, Chauncey will happily sign it.

In the old days, before ESPN, the internet and blogs, a reporter didn’t have to rush to print every step of a contract negotiation. You laid out the parameters for both sides, you reported whatever propaganda each side wanted to spew and you waited for the final deal. We can’t do that any more. Any blip of information, however preliminary or non-binding, has to be put out there immediately. So, you are going to have days like this, when a normal step of a negotiation process gets diced and sliced by various media outlets until you can’t remember what the original piece of news was. The news is this — the basic structure of a deal is in place for Billups to return to the Pistons for the next five years.”

Matt from Detroit Bad Boys took some offense to end of McCosky’s statement.

A. Sherrod Blakley, who was the first to confirm the the deal wasn’t done, answered some questions about the incident and the Amir Johnson situation.

In my eyes the deal is on it’s way to being done. The Pistons will be getting Chauncey’s services without breaking the bank, but still giving Billups what he deserves. Chauncey gets paid and the Pistons have some left over to keep Amir and sign a decent free agent (Hill or Mo Pete). I am sure we will hear more very soon but until this all gets hammered out. I am remaining confident that it’s pretty much a done deal.

What we do have to contemplate is what exactly will happen with the remaining Pistons. I am sure Dumars will be working the phones trying to make some sort of deal.