One of the many perks of being a Pistons season ticket holder it that each year they hold Crew Partys. At the Crew Party you get a the opportunity to:

As soon as we walked into The Palace we headed down to the court. My nephew Mike D. took a couple shots at the basket and I just stood at the top of the key. We then proceeded to the banners, which were lowered to take some pictures. 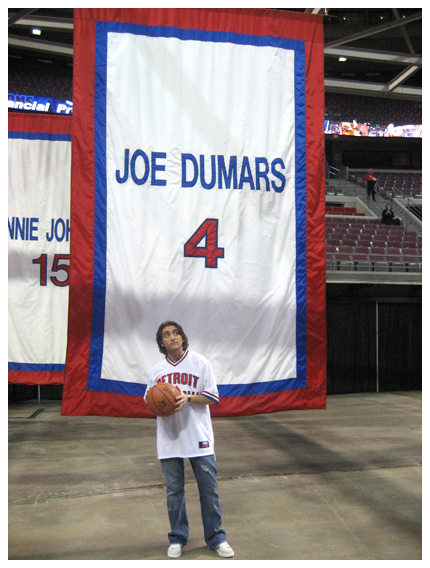 Then we waited for the the players to arrive and start signing autographs. Mike and I decided that we were hitting Sheed first, so we waited in line to see Mr. Wallace. Sheed had a couple of small kids in his suite. When we walked up there one of them announced “she’s got a ball don’t lie shirt on” to which I replied, I have one for Sheed too. He then said, “no you don’t, you’re not going to give that to him, you are going to have him sign it!” I laughed and assured him I was giving it to Sheed. He then looked and saw that I had my Sheed AF1 in my hand, then he shouted “ohhhhhh look she has the shoes!” I am not sure who’s kids they were but they sure were cute and had me cracking up.

When we finally got up there I told Sheed that I was Natalie from Need4Sheed, he smiled and said “oh yeah Need4Sheed.” I explained to him that I never got to give him the t-shirt in person last time I saw him in New York, so I wanted to give him another. He took the t-shirt smiled again and carefully signed my Sheed Air Force 1’s. SHEEDtastic! 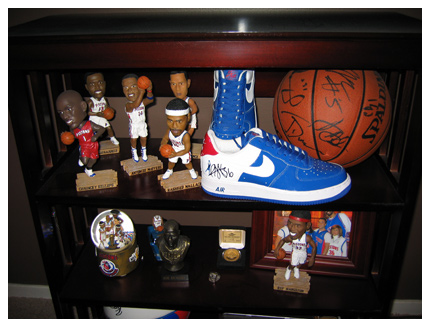 We then hit the other players to get their autographs too. The only two we missed were Rip and C-Webb because time simply ran out. All the players were very nice, but I did get to talk to Jason Maxiell and tell him about the site and that I have been hyping him up forever. 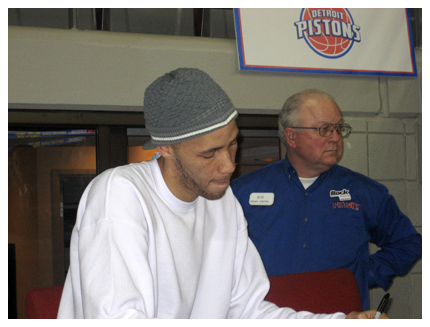 All in all it was a pretty cool, The Pistons organization really do go all out for their fans. Mission accomplished, I talked to Sheed and gave him a Ball Don’t Lie t-shirt with his cartoon face on it and I got my beloved AF1’s signed. What a day it was.

Lang Whitaker from Slam Magazine saw Sheed Monday night in NYC and was right about to ask Rasheed about Need4Sheed but he walked away. I wonder what Sheed would say if he was asked? Maybe one day we will find out.