I you didn’t already know Blogfest was on Sunday at the Pistons – Heat game. Matt, Ian (The Detroit Bad Boys) and I had a great time meeting everyone. Though we put together “the fest” pretty late, we still had a nice turn out. Next years event promises to be much better planned so more of you can attend.

It’s funny the bond you have with people whom you have never met. It has got to be a Pistons type bond, but it makes you feel like you have been friends for years. 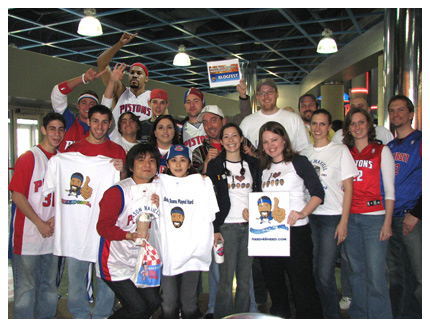 We had some fun, gave away some prizes, had a couple of birthdays and people come from as far as Toledo and D.C.. I can’t wait until next year.

On a side note I brought a George Blaha T-Shirt with me to give to Mr. Blaha on Sunday. On the way to the game I realized that the game was on ABC, therefore George wouldn’t be in his usual place at the Comcast Pavilion doing his Pre-Game show. We plotted during Blogfest to try to figure out how to give the shirt to George, but we weren’t successful. Untill…….

More on that later.