In my Maverics – Pistons recap post I mentioned that Mark Cuban stood up in the closing minute of the game, faced the Pistons crowd and hollered, “Western Conference Defense,” Mason style. You know me, I took offense to that, for the simple fact that teams like The Cavs openly mock the Deeetroit Baskeballl chant, when they do nothing but mimic everything the Pistons do.

Pistons fans didn’t like it either. They even went so far as to bash Mr. Cuban in the comments section of the post. To my surprise Mark himself commented back and explained the reason why he did what he did. 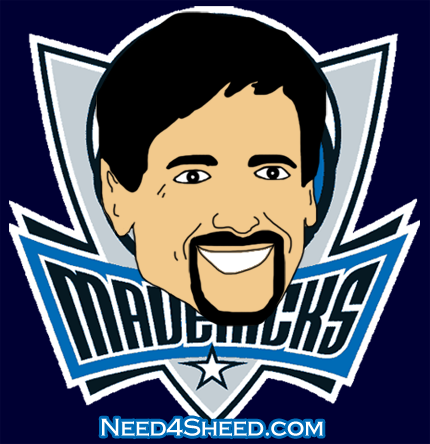 “Despite all the love I’m getting on the blog comments, let me explain my “taunting”

first, let me say I’m a huge Sheed fan and he knows it. So i check out this blog now and then

2nd. I did say “western conference defense ” to the crowd. And if you do see a video of it, you will see they were all laughing. Why ?
because a big chunk of the game, the guys behind me, someone said it was the Mayor, were yelling at us ” Eastern Conference Defense” when the Pistons would get a big stop.

Which we all took as fun. And when we got the stop to end the game, i said the same thing back.

Thats what makes the games fun.

And for those of you who think an owner should just sit in a box. Feel free to buy a team and do just that.

Me, I love the NBA and the Mavs and its a whole lot more fun getting in to the games.

Some might not think this comment was made by Mark himself, but I have to believe that this one is legit. There have been many comments on this blog that people have made claiming to be someone they are not and when you read them you can tell. But this legitimately sounds like Mark wrote it himself.

Now that I have the whole story I have a different take on the matter. I’m not really angry anymore and if it were me, I probably would have done the same thing. Heck, I have done much worse when it comes to showing my team spirit at a Pistons game. I am still a bit shocked at what I did as Reggie Miller was walking off the court right in front of me when The Pistons beat the Pacers to win the ECC on their way to winning the NBA Championship in 2004, but that is a story for a different time.

I happen to like Mark Cuban, always have. Why? He is a fan. A fan like you and me, but with the best access you can get to your favorite team. And if I were in his place I would act just like him. Hell, I do enough for the Pistons and I don’t have anything to do with the team. Could you imagine if I owned them. I would be Cuban squared. Now that’s a scary thing.

Mr. Cuban, if you end up reading this drop me an email, it would be an honor. I will even go as far as to invite you to a Finals game and let you see where the real fans, like yourself, sit every night.

UPDATE: I just got an email from Mr. Cuban…. The comment was legit.