I don’t have to tell you about my fondness for George Blaha, I am sure I have expressed it enough on the site already, but Need4Sheed.com reader Ray Rogissart went one step further. 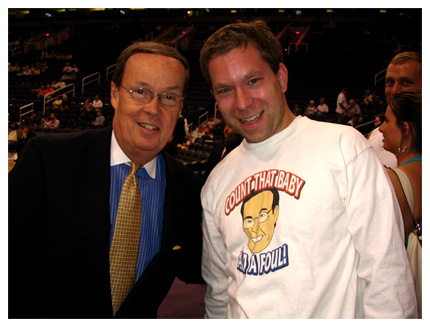 Ray and his wife Nicole, from Livonia, traveled to Phoenix to catch The Suns – Pistons game and this is how the story unfolded.

“As is typical with road games, we were standing near the visitors’ tunnel watching the Pistons warm up about an hour before the game. We knew if we waited there that George would eventually appear. “Special K” appeared first and George followed seconds later. J-Max was signing autographs nearby, so there was a lot of yelling and commotion around the tunnel. As a result, George didn’t hear me call his name until he had actually set foot on the hardwood. When he turned around he saw my shirt and paused, standing about thirty feet away. After a few seconds he pointed at my shirt as if he was astonished at what he was looking at. He flashed a huge smile and started walking toward Nicole and I. His body language said, “I know I have a show to do, but I’ll take a few minutes to talk to these folks.” I asked him if he liked the shirt and he just kept smiling, slightly embarrassed I think (Nicole was wearing the “I heart [five caricatures]” shirt). We told him that we were in town for the game and asked him if he could say hello to our friends and family back home. He promised he would. I was told that he gave a shout out with 39 seconds left in the third. Being the pro that he is, George agreed to pose for a photo and shook our hands. We told him we loved his work and he was very appreciative. At this point, other fans had crowded around to speak to George. Although there were numerous Pistons players in the area, I said loudly (so George could hear) “Nicole, our work is done here,” before starting our walk to our seats. That induced another smile from George. He then nodded and said, “Mr. Rogissart,” as though he was verifying the correct pronunciation of my last name for the on-air shout out. I said “thank you sir” before walking up the isle. The game speaks for itself. Great night overall.”

Well done Ray, that was Sheedtastic! I can’t tell how cool I think things like this are. Thanks for making me smile Ray and Nicole and thank you for introducing Cartoon George with the original.