I recently received an email from Paul who runs a website called NextGenerationSports.net. The site is based around ranking local area High School athletes and does a great job profiling them.

I don’t know if many of you know that Joe Dumars son Jordan plays basketball for Detroit Country Day, the same high school that Chris Webber graduated from. Well I was looking over his player page and I noticed something that I had to bring to your attention. Jordan lists his mother and father as his biggest influences but when asked who is NBA player was he answered….. 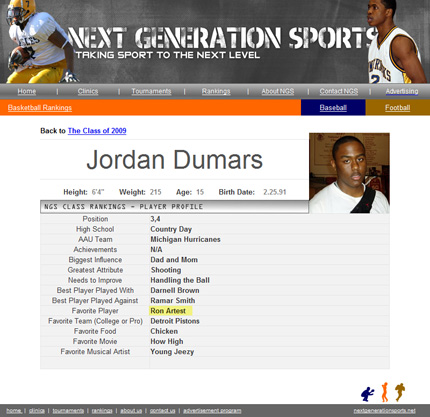 I would have guessed that he would have named Joe or at least one of the current Pistons. You have to give it up to Jordan for speaking the truth and stating that the one player that started “The Brawl,” that tarnished The Pistons, The Palace, the City of Detroit and the NBA is his favorite player. Maybe he named Artest to get a rise out of his father.

I wonder if Jordan prides himself on defense?

Jordan, if you happen to see this we want to know who your second favorite player is. Need4Sheed wants to talk.