Pistons Fans Are Sheedtastic No Matter Where They Might Be

I received a very interesting email from Jonathan Feuer a fellow blogger who runs his own South Florida Sports Blog called SporTech Matter. It seems that Jonathan went to the Heat – Cavs game Sunday night in Miami and he witnessed something so interesting that he had to let me know about it.

“I just wanted to drop you a note b/c while attending yesterday’s Heat/Cavs game I noticed a small group of people rocking Sheedtastic shirts. I wish I had gotten a picture for you but it seems like you have a nice following in South Florida. They also proceeded to shout Deeeetroit Basketball every chance they got when the crowd got quiet.” 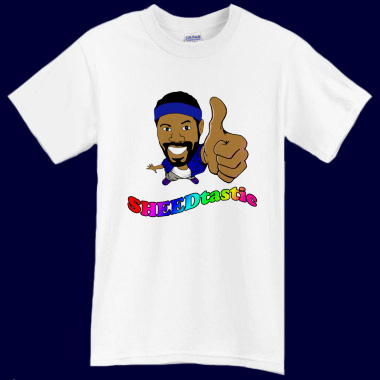 Ok….It’s extremely cool that these Detroit Fans had Need4Sheed.com T-Shirts on but that is not the thing that makes me proudest. They went to a HEAT-CAVS game and screamed DEEEETROIT BASKETBALL whenever they had a chance. How awesome!

Let me just say thank you to you, whoever you are for making Pistons fans proud. Let us know who you are so we can thank you, please email me (need4sheed@gmail.com) with your experience and pictures of the event so we can salute you in the same Sheedtastic manner that did by representing the Pistons even though they weren’t on court.

As long as I don’t see a Jason Maxiell Eats Babies T-Shirt in a maternity ward I these kinds of things make being a Piston fan even that much better.

Thanks to Jonathan for bringing this to my attention. I suggest you leave your love in the comments to these Sheedtastic Pistons fans, whomever they may be.