Did I ever mention that Pistons fans are AWESOME? Well if I haven’t let me explain. First there was Amy who drove to Chicago to openly mock Ben Wallace. Then we he had Rebecca who went hours early to the Pistons – Wizards game to see if she could catch a glimpse of Chauncey. I myself flew to NYC on a days notice to see Rasheed tape an episode of Quite Frankly. I am sure there are many more tales to tell but today I have one that made me smile.

Gene Keselman, Ann Arbor native, is in the Military is stationed in DC. Gene and his wife attended the Pistons-Wizards game. What makes this so special you ask? He introduced the real Chauncey Billups to Cartoon Chauncey. 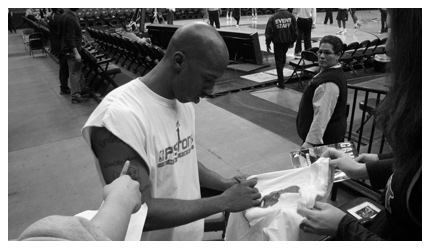 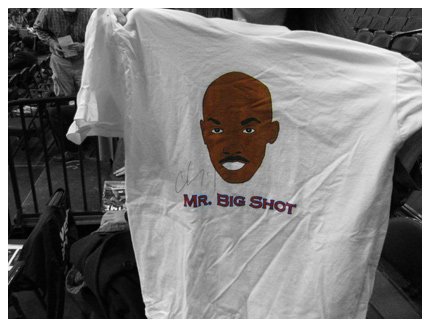 Pretty cool, right? Gene also got Delfino and Lindsey to stop and sign. You can read all about it on his Blog right here. I forgot to ask Gene if Chauncey said anything when he saw his cartoon twin.

Gene said: “Chauncey definitely reacted to the shirt though. He was walking away from us as he was signing autographs, but when he caught the shirt, he doubled back to get to us.

Who doesn’t like to see themselves as a cartoon on a shirt?”

You people never cease to amaze me. Keep them coming!