You Can Always Go Home 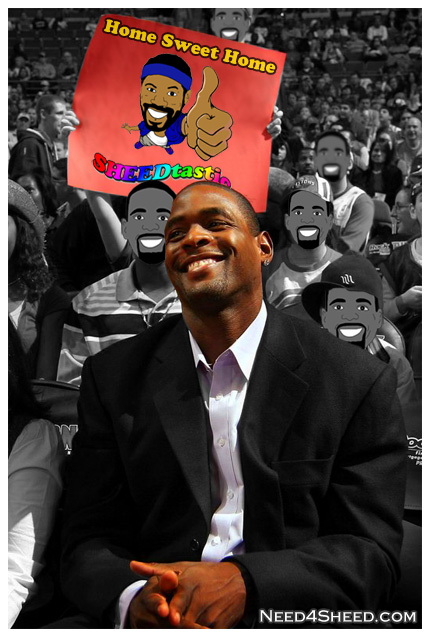 It seemed to be timed just right as Chris Webber entered the Palace floor at a timeout in the first quarter of the Pistons – Timberwolves game. He was spotted immediately by the fans as he and his father started to make their way to their front row seats under the basket.

At first just the fans in the immediate area of the Palace tunnel saw the new Piston walk into the building, but as they started to cheer for him, more and more fans caught on to what was happening. The cheers grew louder and louder while Webber made the short walk to his seats with his father and Palace security by his side. By the time they showed Chris on the jumbo screen most of the Palace crowd was cheering loudly and standing proudly for the hometown boy who would soon be wearing a Pistons uniform.

There was a buzz in the air as the cheers grew louder and louder and Webber’s smile grew wider and wider. He looked a bit choked up and even a bit surprised from the warm ovation he received. It couldn’t have been a better greeting for Webber who has always wanted to play for the team he grew up cheering for. If this was any indication that his hometown was ready and willing to put the past behind, this was it. Right now it’s got to be clear to Webber that he made the right decision.

Although he left his seats before halftime and didn’t return, I am sure Pistons fans passed the test. Webber tested the waters and now he has nothing to worry about when he finally suits up with the Pistons and plays his first game for a team he always dreamed about playing for. Webber gets to come home and the Pistons get the services of an All Star who already has his heart with the team. He wants nothing more than to win a championship, and what better place for him than Detroit. Now that would be a true Hollywood ending.