Pistons Fans Have Their Own Swagger

Need4Sheed reader Amy Ippolito attended the Pistons-Bulls game in Chicago. You might think that’s not a big deal, but when you see what she, her husband and their friends did, you will know why these Pistons fans deserve our appreciation. Just check out what they looked like as they walked into The United Center. 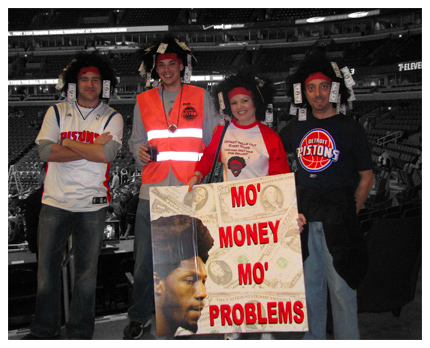 I asked Amy to give us her take on what it was like at the game on Saturday night.

“I was so nervous to go to this game in Chicago for fear of how the fans would react to us. Believe it or not, everyone LOVED us! We seriously could not walk around the United Center at all without random people stopping us to take our picture. We would pose, go to walk away, and be stopped again by someone else! It was so much fun! And A LOT of them were Bulls fans! One lady who lives in Chicago says to me, “Girl, you have a lot of nerve wearing that shirt… but I love it!” And then she high fived me! And that is where my problem with Chicago comes in… If anyone came into our house and wore something to make fun of one of our players the last thing I would do is take pictures with them or tell them that they are great! The saying “There’s no place like home” is totally true. Pistons fans are one of a kind. I swear I saw more sports coats than Bulls jerseys. Where’s the fan gear Chicago?? They call themselves fans?! And as far as the crowd and other people yelling “Detroit sucks” at us… PUH-LEASE… like we haven’t heard that before! After all, we ARE from Detroit! Ha.”

Amy and her friends enthusiasm for the Pistons just went to the next level. It was simply SHEEDtastic! I loved what she did so much that I am making this a regular feature on the site.

If you are a Piston fan attending a Pistons game in ENEMY Territory, please feel free to let me know here at Need4Sheed (need4sheed@gmail.com). Send pictures or video, along with your story and I will feature you on the site after the game. To go a step further, after the season is over Need4Sheed readers will vote on their favorite Piston Fan that was featured on the site and that Fan will receive a Need4Sheed.com T-Shirt.

So Pistons fans around the country start showing your support for the team, it might get you a little bit of fame and maybe even a free t-shirt.