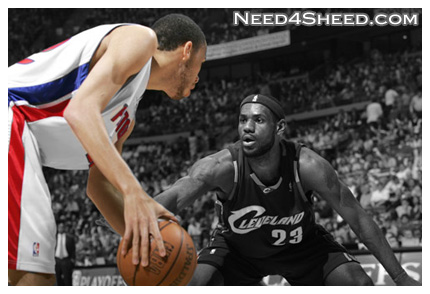 The 15-8 Pistons take on The 14-10 Cavs in a battle of Eastern conference supremacy. It looks like Rasheed will be making his return tonight against the Cavs. I will be surprised if Sheed plays more than 25 minutes, unless he’s having a monster game, which might be the case because as you all know Rasheed likes to play the villain and there is no better place to put on his mask than in Quicken Loans Arena.

Don’t be surprised if you see a few “Rasheed Must Bleed” signs in the crowd, in reference to Sheed’s hard foul on Ilgauskas last season. Even on gimpy wheel, you can bet Sheed will be all over Varejao if there is any kind of trouble. 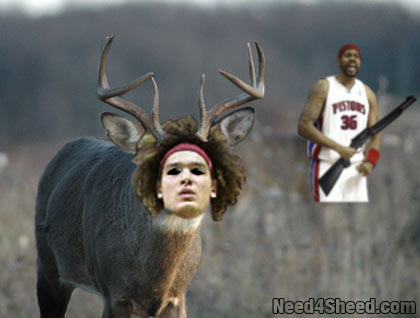 Tayshaun is downplaying the battle saying that the Cavs shouldn’t measure themselves against a Pistons team that isn’t playing their best basketball.

“I don’t think this would be a good time to measure yourselves against the Pistons right now because we’re not playing our best basketball,” he said Wednesday before his team made the short flight to Ohio. “They probably feel they’re not playing their best basketball, too, so that’s not the right time to do that.” Via Daily Tribune

The wannabe Pistons Cavs just might take offense to that statement by Tay. I hope Tayshaun isn’t using that as an excuse if the Pistons have a bad night in Cleveland.

Fellow Sheedologist Dominique Wilford has the Matchups for this one, although I have to say I can’t agree with him on the Tayshaun – LeBron matchup.

“The Goon Squad” (Davis & Maxiell) should get some minutes to give Sheed some rest for his ailing ankle and knee. 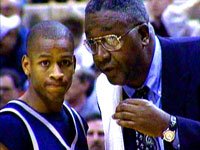 The Pistons are on the national stage tonight, the game is being broadcast on TNT. Make sure you catch the first interview with Allen Iverson since his trade to Denver. Coach John Thompson sits down for a one-on-one interview with “The Answer”. Here are a few excerpts from the interview.

Iverson on his infamous “practice” comments: “It’s just blown all out of proportion. That was a day I wish honestly never happened. I didn’t mean it like ‘I don’t care about practice’ or anything like that, I’m just saying we are having a press conference and all you all want to talk about is practice and we should be talking about your (Iverson’s) future is still being here (in Philly). I couldn’t have accomplished the things in my career if I didn’t practice, and the worst part about that whole thing is when a kid comes up to me and says “Allen I don’t like practice, either”. I’ve got to straighten that kid right then. I didn’t mean what these people are putting out there, that every time you see that one clip you see “I’m talking about practice”. I didn’t mean it like that. I just want kids all over the world to know you have to practice to be any good in this game, it’s too hard. When you are not practicing someone else is getting better…I don’t get enough credit for the practices I HAVE been to in the past ten years (laugh).”

Thompson: “Are you a thug?”

Iverson: “A thug? Man, I’m 31 years old and a husband with four kids, I hope I’m no thug. I hear all those negative things and don’t hear anything positive. I think that’s all those people feel…that way that’s all they hear about when you hear Allen Iverson did something negative or something. And when it’s about something negative, everybody wants to rush to get it. I’m not going to be the same as I was when I’ve made so many bad mistakes. If I’m not getting older and more mature at 31, then something’s wrong.”

I am anxiously awaiting both.