Sheed Out With Ankle Injury 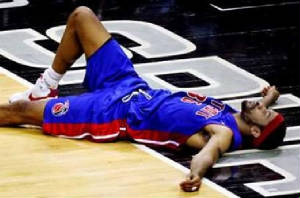 “Pistons president Joe Dumars announced Friday morning that forward Rasheed Wallace would not play Saturday at New Jersey or Sunday against Seattle at The Palace.Wallace has been bothered with a sore right ankle for more than a week and the Pistons don’t want to take any chances. The plan is to rest Wallace for a week, and then re-evaluate his status before the Pistons play at Cleveland on Dec. 21. Wallace initially sustained the injury last May in the conference semifinals against Cleveland when he rolled it over the foot of Anderson Varejao. Either Dale Davis or Antonio McDyess will start in Wallace’s place.” Via The Detroit News

Bad news for the Pistons, but lets hope the rest helps Sheed. This is a sad day for Need4Sheed, we certainly aren’t feeling very Sheedtastic right now. I guess we are going to be seeing a bit more of Mr. Maxiell.