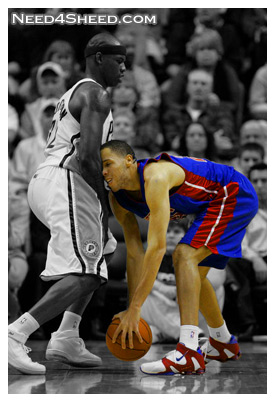 Once again the Pistons can’t seem to beat teams with losing records. The Pistons lost to the Pacers 101 – 90 Wednesday night in Indiana. Though there were some bright spots at times, Detroit couldn’t seem to put a large enough run together to beat the struggling Pacers.

But let’s give credit where credit is due, the Pacers, led by Jermaine O’Neal’s obscenely large forehead 26 points and 14 rebounds, played a great game. This one I blame on the Pistons defense or lack there of. It seemed as though the Pistons just couldn’t get stops when they needed them and it didn’t help that they shot just 39% from the field.

So if the Pistons know that they have a problem getting up for these teams, why don’t they do something about it? FSN Detroit even did a piece on just this issue in their post game show. Click here to watch the Video.

When asked if the team and coaches still were on the same page, Wallace said, “Oh yeah, we’re still on the same page. There aren’t any different pages in the book.” Via The Detroit News