Pistons have a Sheedtastic night in Dallas

Now that’s more like it. The Pistons looked good from the start in the 92-82 win over Dallas. They had their swagger back Thursday night in front of the TNT audience. Early on game the Pistons were even shooting a ridiculous 59% from the floor. Tayshuan Prince was the Pistons leading scorer with 20 but it was Rasheed Wallace who dominated for the boys in blue.

Sheed was on FIRE from downtown going 5-for-8, but it was a stretch in the third when he took three 3 point shots in four possessions and made them all. To top that one even came off the glass and of course Sheed called it. He looked good from the start getting 10 in the first quarter and pulled down nine boards and two blocked shots. He played great, he took charge, he carried the team at times and had a blast doing it. These are the games I love to watch. When Sheed is playing well and having fun nothing can be better than that. Sheedtastic!

Chauncey is still struggling with the uncharacteristic turnovers and it doesn’t help that Flip is not taking care of the ball lately either. Chauncey had five turnovers but also added five steals, Flip had three turnovers in 20 minutes but he made up for them with five rebounds, four assists and three blocked shots. 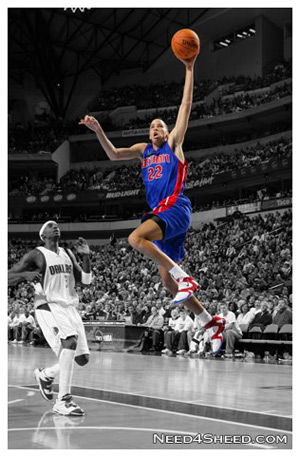 Tay was solid again, and vying for his spot on the all-star team. Prince 1-for-1 from beyond the arc with three steals, seven rebounds, a blocked shot and a assist to go along with his 20 points. Tayshaun has been a rock the whole season for the Pistons. I am a bit worried about all the minutes he’s been logging lately. I do actually trust Delfino when Tay is resting but Saunders is still a bit wary about putting him on the floor (again).

It’s was funny watching this game. It makes you wonder how this team can lose the games that they do when they can beat a great team like Dallas in their own building. The Pistons played fantastic defense, they took good shots and they actually wanted to win this game. They are now a half of a game ahead of the Cavs for first place in the Central. Lets hope they take this win into Orlando and play with the fire they had in Dallas.

FYI…
In Mark Stein’s ESPN Insider piece on the Pistons after the Mav’s game he says this.
“All they wanted to do Thursday night, after their finest 48 minutes of basketball since Ben Wallace left them, is run back to the locker room to catch the Phoenix-New Jersey highlights.”

“Lawrence Frank is not going to be happy scoring 157 points and losing,” Rasheed Wallace bellowed, referring to the Nets’ coach.

After watching what seemed to be an endless flurry of uncontested shots for Nash, inside and outside, ‘Sheed loudly wondered: “Is anybody going to play any f@#%ing D in this game?”