Portland steals one at the Palace

The Portland Trail Blazers snapped their five game losing streak against the Pistons Tuesday night. Zach Randolph had a monster night. Although he was held scoreless in the first, he went on the score 31 points and ultimately the game winner. Rip Hamilton was the leading scorer for the Pistons with 25.

“This was a horrible loss for us,” said Chauncey Billups, who kept the Pistons close with eight points in the final 4 minutes. “These are the kind of games that can haunt you late in the season.” 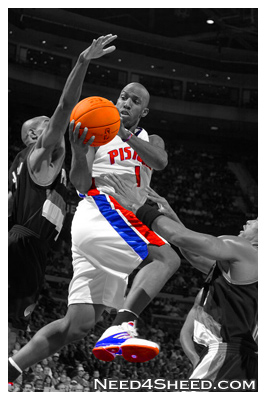 Didn’t the Pistons figure that out after the the loss to the Bobcats the other night?

Once again the Pistons slept on a team under 500. I am sure they would have liked to win this one at home against Portland, especially coming off the loss in Charlotte. They sure aren’t making things easy for themselves. The Pistons will be on the road for the next four games with games in Dallas, Orlando, Indiana and New Jersey.

I don’t think there is much to say about this one especially when you know that they should be going into Dallas riding a 10 game winning streak. My good friend The Microwave over at Pistons Forum.com said it best, “Tonight’s loss was very disheartening.” As Pistons fans we have been very spoiled in the last few years, but to watch the team play like this when we know they could do much more is hard. At least I know I am not the only one who feels like this.

On a good note 3manlift.com has Chauncey Billups as one of the top 5 point guards in the NBA.