Often in this world the little guy gets the shaft. Sometimes people think they can get away with things just because of who they are or what they do. I am here to tell you I haven’t been this angry since some older kids stole my brand new bike from the park when I was nine years old. Let me tell you why.

I often point you towards one of my favorite stops of the day YAYSports, where the ever hilarious and insightful Cavalier entertains us on a daily basis. I can’t say that there is a more creative and original basketball blogger around who has been as inventive as he has. Well The Cavalier has been wronged and something needs to be done about it. 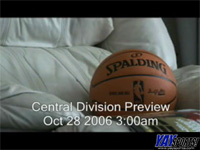 Scoop Jackson blatantly ripped off YAYSports, in one of the ballsiest ways imaginable. Scoop wrote this post and took the persona of the new NBA ball, something that YAYSports has been doing since May. Not only did Scoop Jackson steal the whole angry bitter NBA Ball persona that YAYSports has been posting and making movies about for months but he actually referenced the name that The Cavalier penned “The Orange Roundie.”

“A Web site gave me a nickname. They call me the Orange Roundie.”

The guy stole the whole idea, blatantly ripped it off and then referred to the creator as “A Web Site”.Now that’s just felonious!

I don’t often get this worked up but this just doesn’t fly with me. Scoop Jackson rips off one of the most creative basketball bloggers who surely has more loyal reader than he does, on ESPN.com and gets away with it. I think not!

Now I am not the best writer and I can’t say that I am a creative genius but I do take pride in what I do just like everyone else would. This kind of thing makes me sick, it’s not that hard to give credit where credit is due, or not steal someones idea in this case.

So if you are like me and you think this is as wrong as I do please fire off an email to the ESPN Ombudsman and let them know this hasn’t gone unnoticed.

*UPDATE*
The Scoop rip off now reads… “A website(YAY Sports)” no link. Not good enough guys!

Deadspin got Scoops take on the situation which makes it much worse in my opinion.
“I actually thought I was giving them some love, even though ESPN edited out the part about them being the ball’s favorite site. Just trying to have some fun. Hope you enjoyed the piece; tell YAY I thought their overall ball coverage was brilliant. The ball, on the other hand, had a few issues.”