It Wasn’t Pretty But I’ll Take It

The Pistons looked out of sync almost the entire game. Rasheed only had eight points, Chauncey turned the ball over five times and Rip was the only Piston with more than 12 points. It was rough, messy but it was a win nonetheless adding to the Pistons winning streak that is now at seven games.

If you read major media pieces about the game they will tell you that Wade had an off night. Wade was just 5 for 23 with 21 points. What they won’t tell you that the reason that he was off was because of the Pistons D. Rip Hamilton did a great job on him along with the rest of the Pistons effective zone and clogged the lane so Wade couldn’t penetrate. When he did get in he was forced into bad shots. His biggest mistake was in the final seconds of the game and the Heat down by one, he ran the clock down to make sure the last shot would be his and was forced into a 20 footer that didn’t even come close. I did enjoy the drama when Wade took a hard foul and landed on the floor and tried to play it up like he was auditioning for Lee Starasburg at the Actors Studio. 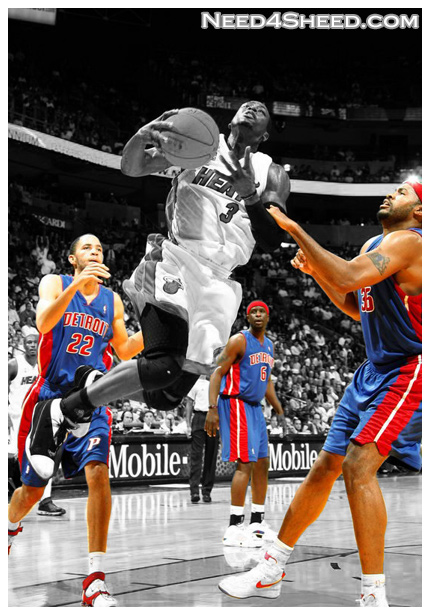 Though most of the Pistons wins have come when Rasheed has had good games, you wouldn’t know he was key unless you watched the game. Sheed had a couple of timely threes in the fourth quarter and couple of nice blocks to help shut down the Heat when it counted. This one was clearly won with defense.

I did question the use of the bench at times in the fourth quarter, but overall Flip’s rotation was solid.

Rasheed added another technical foul to his count when he disputed the clear foul that was not called on Chauncey Billups at the end of the half. I don’t know if any of you caught it but when the Pistons were walking off the court after arguing the non call you could clearly see Joe Dumars discontent and if you can read lips you know he wasn’t happy. I don’t remember the last time I have seen Joe so worked up.

Now I have one question, someone please explain what kind of call Joe Crawford made on Rip’s foul shot attempt?