“This is probably something you had to see to fully appreciate, but Rasheed Wallace had everybody laughing at shoot-around this morning, working on his Dwyane Wade flop. He would throw up a shot and then throw himself on the floor — ala Wade. Then he would get up slowly and limp like Wade does. I think he intends to do it at some point in the game tonight, so look for it. 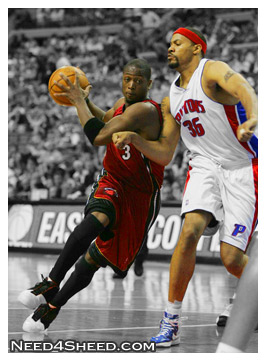 But all kidding aside, Wade cannot be defended. Referees simply do not let you look at him crossly, let alone touch him. Wade has shot 163 free throws in 14 games, 11.6 per. By contrast, Chauncey Billups has shot 108, by far the most of any Piston. No other Piston has even shot 80 free throws. Wallace was having fun with that, too. “If you just yell, ‘Boogety-boogety booh’ to him, that’s a foul. If you give him a hard look, that’s a foul,” Wallace said. Very true.” Via Chris McCosky The Detroit News