Well seeing as the Pistons haven’t played in four days you could say that I am pretty excited to see them take on the Heat tonight. Yes I am excited about the game but it’s not quite the battle I thought it would be considering we lost to the Heat in the Eastern Conference Finals last season. A Shaqless aching Heat does not spell thriller to me at the moment. I still wholeheartedly believe that the Heat didn’t end the Pistons season last year, at that point Larry Brown’s Knicks could have taken them down.

Well that’s all history, the Pistons are on a six game winning streak and they are standing at the top of the Central division a half of a game ahead of the Cavs. So the Pistons could use a win, not because they are playing the current NBA Champions, but because they are playing well right now and they would love to keep rolling. It’s early, but the Pistons are in first place and I am sure they want to stay there. Here are the Matchups for the game by Dominique Wilford. 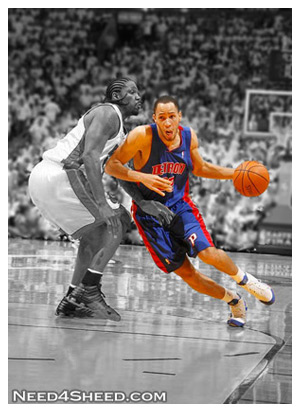 Some of you might not know this, but our resident do it all small forward Tayshaun Prince has been having a career season thus far. He’s silently gunning his way to a spot on the All Star team. Chauncey has even dubbed him “The Silent Assassin.” So if you haven’t started voting for Tay and the rest of the crew remember to do it every day. I am sure Mr. Prince would appreciate it.

While we are on the subject I found a nice Tayshaun Prince YouTube mix for all to enjoy. My favorite highlight of the mix has got to be the fake and spin move against LeBron.