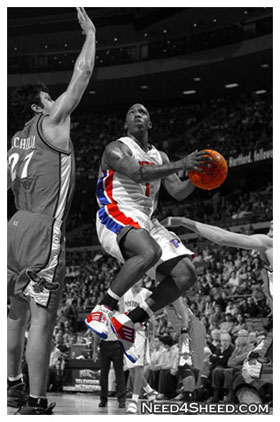 With the holiday and the fact that I have been under the weather, I didn’t get a chance to say too much about the Pistons win over the Hawks at the Palace Wednesday night. Is this double-double thing getting contagious or what? Chauncey led the team with 24 points and 10 assists, Tayshaun had 15 points and 11 rebounds and Sheed had 14 point and 13 rebounds. That makes three Pistons with double-doubles and Sheed’s fourth in as many games.

Their rebounding is getting a bit better but Sheed could use consistent help grabbing boards, especially on the offensive end. If Tayshaun and the guards could pick up a couple more rebounds a game then it might not be as big as a problem as it was when the season started. I still think their defense needs to tighten up a bit, Atlanta got quite a few easy buckets driving the lane.

Delfino got some extended minutes and although he was just one for three with six points he hit all of his free throws and was very aggressive when he was out there. Flip Murray, well I will keep my reservations to myself until I can see him play a bit more, but I will say I have been far from impressed and will leave it at that.

Tonight the Pistons will see what rookie Adam Morrison can do along with the healthy Emeka Okafor. I am hoping this cold I have won’t keep me from going to the game, but if it does I will happily watch from the couch while enjoying an abundance of Thanksgiving leftovers.