The Pistons turn it on in the fourth to beat Houston 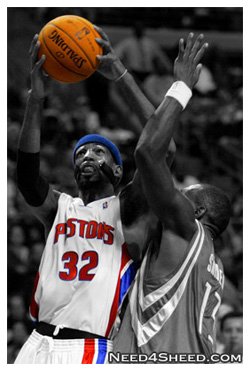 Yao an McGrady had big games but Detroit stopped them when it counted to beat the Rockets 104-92. Rasheed, who has been huge in the last two Pistons wins, took control of the game late in the fourth quarter on both ends of the floor. Richard Hamilton led the Pistons with 30 points, Chauncey added 23 and Rasheed and Tayshaun each had 15.

Although Rip led the team with 30, Rasheed was the most valuable player of the game. His defense down the stretch helped the Pistons pull away in the fourth quarter holding Yao to just two points. Sheed had been playing his best ball of the year, taking control when it counts and leading the team in the right direction. He seems very comfortable with his role and has played center quite a few times when the Pistons played small. 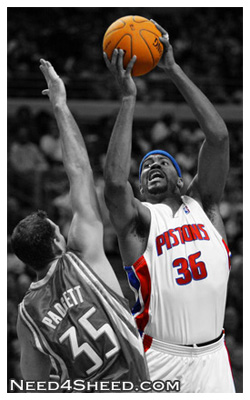 As I sat at Palace Saturday night something happened that I had never seen before. The whole Pistons bench was called for a technical foul. I turned to my friend and gave him the ” WTF” look when Mason announced it and he gave it right back to me. Neither of us could understand how the whole bench could be assessed a technical foul. We sat during the entire half time break talking about it. We just couldn’t understand it. Who would the NBA asses the fine to? Who would it count against? We were baffled.

When I looked at the box score today I see someone changed their mind and gave the technical foul to Rasheed. Can someone please explain this to me? Did I miss something? What was the explanation on the broadcast? Does this mean Sheed is susceptible to techs when they can’t figure out who else to give it to?

We still could use a lot more signatures before I send the petition to Mr. Stern. So if you haven’t signed it already take a second and do so and let everyone you know do the same. I am not the only NBA fan who is not happy with the new Zero tolerance technical foul rule. Richie, a Need4Sheed reader sent me this video satire that he made about the new NBA rules. Now you don’t have to go as far as Richie did to express your disappointment, just take a minute of your time to sign your name and let your voice be heard.