They still don’t get it 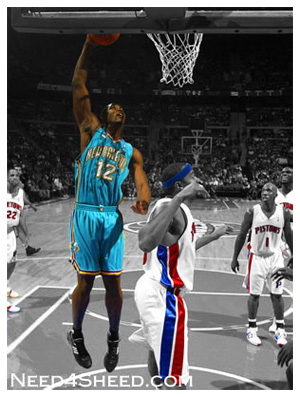 So we all thought the Golden State game would be a wakeup call for the Pistons. After an uninspiring west coast trip the Pistons returned to the Palace last night to get beaten by a crippled Hornets squad. With two of the Hornets starters out and the Pistons at full force with the returning Rip Hamilton, they were on no throttle the entire first half, giving up 60 points by halftime. The Pistons clawed their way back only to get beaten in the last seconds by a Hilton Armstrong free throw.

There is no reason that this team should not be winning. Do they understand that there is an actual game going on? They know they can’t win games by turning it on whenever they feel like it because that switch broke last season in the playoffs. And although Joe Dumars tried fixing it as best he could during the off season, it still doesn’t work.

I am not one to lay blame but obviously Flip Saunders can’t figure out how to fix what’s going on. If he can’t make these pieces work well enough to beat the Hornets at home after a dismal showing out west, what is this team in store for with him at the helm for the rest of the season?

Flip Murray isn’t doing what he was brought here to do, sure when he’s “on” he’s “on,” but when exactly are we going to see that happen? And don’t get me started about his dribbling down the clock, I keep getting flashes of Carlos Arroyo when he’s on the floor. Nazr Mohammed hasn’t pulled his weight in the regular season and it’s starting to look like his hands are just as bad as people have been saying. Mohammed is good but I don’t think he is a starter.

I know it’s early but things aren’t working the way we would have hoped with the Pistons new additions. I wouldn’t mind seeing McDyess start and Delfino as the first guard off the bench. It’s worth a try, anything is better than what I have witnessed in the last two games. Hell, just put Maxiell and Amir Johnson on the floor, they are the only Pistons right now that look like they want to win.

As I look ahead to Friday night’s game against the Wizards, the only thing that I am looking forward to is that it’s Chauncey Billups Bobblhead night. Now that says something.