So I have come to the conclusion that many Pistons fans are already in the panic mode. Now I agree that there is no excuse for this team to be playing like this. You can blame Flip Saunders, you can blame Flip Murray you can blame Nazr Mohammed, but none of that is going to change the fact that this team needs a reality check. If they want it bad enough, it’s theirs for the taking. This team can beat any team in the league, but right now they think they can do it just by stepping on the floor. Jump shots, sloppy passes and shaky defense it not going to cut it this year.

I thought they had seen the light when I watched the Lakers game, but Saturday nights horrendous showing against the Warriors showed me I was wrong. I myself am not quite in panic mode just yet. I believe the team needs time to get acclimated with who they are and what kind of team they need to be to win. They just need to want it, they need the fire back, they need to be humbled. Now I am not saying the Warriors aren’t a good team, but if the Pistons aren’t shaken up by what happened Saturday night, or the whole West Coast trip for that matter, then I don’t know what is going to light a fire under their asses to remind them of who they are and what they need to do to win.

Since I have no control over what the team does themselves, I am going to help Pistons fans get the fire back. Nothing pumps me up more than watching the Pistons introductions at the Palace. If this doesn’t help, I dont know what will. Keep the faith.

Pistons Introductions at The Palace Of Auburn Hills 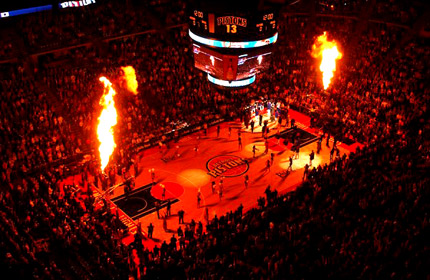