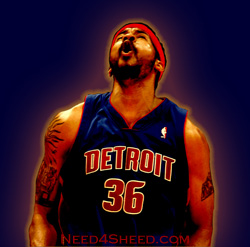 My mission with the Petition is to get as many people to sign the thing as possible. You don’t have to be a Pistons fan, and you don’t have to like Sheed. Any fan who doesn’t like the new rule, thinks it’s inconsistent or that it takes the emotion out of the game should sign it and get other fans to do so too.

I am doing my best to spread the word, so I took it upon myself to email as many people as I could about the petition. I recently emailed one of my favorite Pistons personalities, sideline reporter and writer of the book that is sitting on my coffee table, Blue Collar Blueprint, Eli Zaret. Although Mr. Zaret doesn’t mind the new rule he decided to let people know about what I was doing on his Blog on Pistons.com. So thanks go out to him for doing what he could to spread the word.

If anyone knows how to get ahold of new Pistons web site editor Keith Langlois, let me know. He sounds like he just might agree with our point that the rule is being called unfairly. Just take a look at his latest post, Enough Already.

I am not stopping now, I am still at it every day, but I can use all the help I can get. I figure if everyone who signed it tells someone they know to sign it and so on, it will just be like that movie Pay It Forward, but this time it might have a happy ending for basketball fans.