Saunders upset that the game was decided on technicals.

The Pistons lost a hard fought battle with The Utah Jazz 101-103 last night in Salt Lake City. While both teams played excellent ball coach Saunders is upset that the game was decided on three technical fouls that were assessed to the Pistons during the loss. Watch Flip Saunders post game interview, I’m pretty sure he would sign the Petition, if he could get away with it. 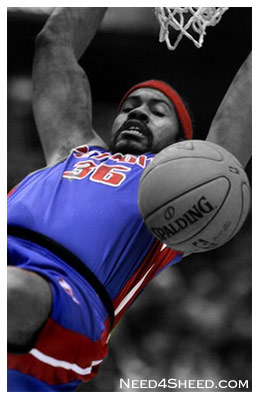 Rasheed got called for his fourth tech of the season in the second quarter after he hit his shot, turned to run back on defense and howled emotionally because he thought he got fouled, no actual words were spoken and the game was not delayed until they whistled him for the foul. Immediately after the tech was assessed to Rasheed, Flip Saunders got called for a technical foul for defending Sheed. The comment that he made to get the tech was, “we might as well play playstation.” Then in the fourth quarter assistant coach Dave Cowens got called for a tech of his own for saying something to one of the refs. That’s 3 techs and 3 points for the Jazz and the Pistons lost the game by 2. I knew this was going to cost the Pistons games I just didn’t realize it would happen this early in the season.

Again I must point out that I am fine with the technical foul rule itself, there is no reason for any player to go overboard including Sheed but it’s not being called consistently. I specifically watched Sheed be extremely emotional on one occasion in the second half after he got called for a foul. It was 60% worse than what he did to get called for his first tech but refs let it go. So are they going to hit Sheed up with a tech early in each game to settle him down so he doesn’t act up for the rest of the game? Meanwhile I watched Deron Williams constantly complain to whatever ref was in his vicinity during the entire game. Someone make me understand.

With all that aside, it was a great game in which Sheed led the way with 25 points 12 rebounds and four blocked shots. Chauncey’s got some rust to shake off, while Flip Murray and Carlos Delfino played some very meaningful minutes that kept the Pistons in the game duringpoints 12 rebounds stretches. 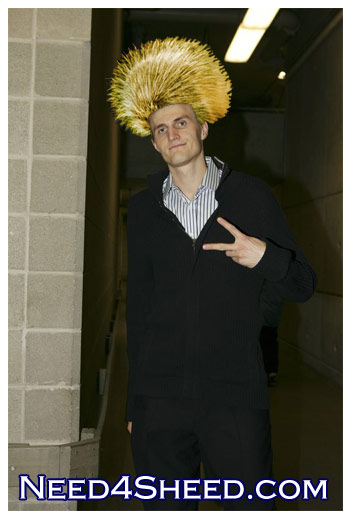 th our good friend Memo and the porcupine Andrei Kirilenko who blocks shots out of nowhere. Check out AK47 looking extremely cool throwing up the peace sign right before the game.