Save Sheed And The NBA Petition

Calling all NBA fans, Need4Sheed.com readers, and Pistons fans. Need4Sheed.com is on a mission to save SHEED and the Future of the NBA as we know it! Behold the Need4Sheed.com Save Sheed Online Petition. Spread the word!

As NBA fans who Love This Game, we beg you to get rid of the Zero Tolerance Technical foul rule that you have put in place this season. We as fans understand you are trying to clean up the league, but we like the game with emotion and flair. How can you take the beloved game of basketball we love so much and sterilize it? We understand the need for technical fouls, but this has gone too far.

Do you expect fans to sit in our seats and not make a peep when our team wins a game on a buzzer beating shot? No we can’t its the excitement of the game, we can’t help but root for our team. If we can’t keep quiet how do you expect a player to in the heat of battle?

We as fans would like to stop questioning calls that change the courses of games. You have put too much power in the hands of referees that are inconsistent and who at times seem unfair. It makes it hard for any NBA fan to question that a game has been called fairly.

Most of all please save Sheed. We happen to think that he’s been treated unfairly over the past few years. Even you have rescinded quite a few of the meaningless techs he’s gotten just for the fact that he is Rasheed Wallace. So Need4Sheed.com along with NBA fans around the world are pleading to you to SAVE SHEED and all the other NBA players that will surely be affected by your long arm of the law.

SAVE SHEED and the game of Basketball as we know it! 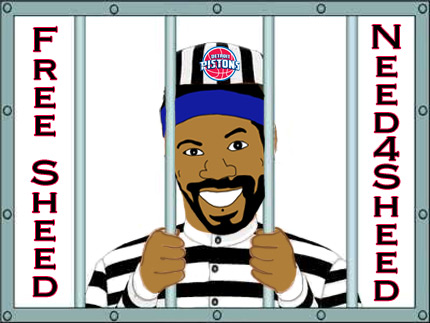 Thanks to James Thompson for the inspiration.