Need4Sheed.com Is One Year Old Today 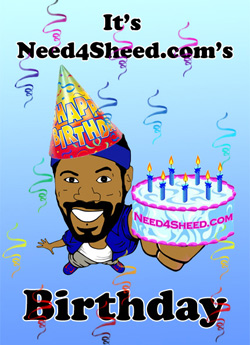 It was a year ago today that I started Need4Sheed.com, as an outlet from my friends to easily access the Pistons Screensavers and Wallpapers I made. Now a year later it’s become so much more than that. I found out that I am not the only basketball fiend and Pistons junkie, there is a leigion of us.

I had no idea that Need4Sheed would become more than just something I worked on to pass time. It’s become part of me. I have made tons of new friends who are happy to talk Pistons with me 24/7. This little site has grown more than I can ever have imagined and I would like to thank everyone who visits. Your kind comments and email’s fuel me to keep on going every single day. Thanks to everyone who has purchased a T-Shirt, it’s so cool to see a random person with a Need4Sheed.com shirt on.

Thanks to all the sites who link to me and spread the Sheedology all across the globe. Especially, Detroit Bad Boys, TrueHoop, Deadspin, everyone at Slam, HoopsAddict, YAYSports, Pistons Talk, The Basketball Jones, Pistons Forum and Jamie Mottram who not only had me as a guest on AOL Sports Bloggers Live but featured the site on ESPN’s Cold Pizza. They are all quality sites that should be frequenting and not only am I am honored to be mentioned in the same company with them but I consider them friends.

I don’t really know how it happened but I have built a Need4Sheed family, and if you’re reading this I consider you part of it. Thanks to Ryan who runs the forums for me and Dominique for his game day matchups.

Thanks to the whole Detroit Pistons organization for all they do and for giving us so many years of happiness. And most of all to Sheed for his attitude and emotion that makes this so much fun to do.

Sheed even celebrates with us.