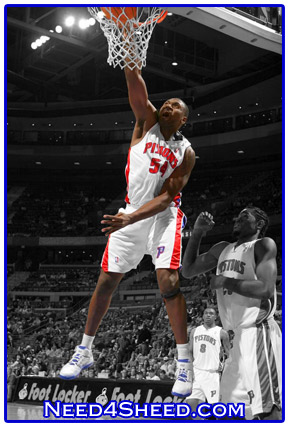 The Pistons topped the Wizards 101-94 Tuesday night in a game in which Chauncey Billups, Rip Hamilton and Rasheed Wallace didn’t play. As the pre-season comes to an end, there is only one question that Pistons fans are unsure of the answer. Has Maxiell earned a spot in the rotation?

I have never seen anyone do as much as Maxiell has done since the offseason to try and win a spot on the floor. He lost the extra weight he needed to, he improved his free throw shooting and he’s a terror on the boards. This kid puts his heart and soul into every single minute he’s out there. He’s done more than anyone has expected of him during every single pre-season game. Though meaningless, he’s the Pistons leading scorer of the pre-season. Who would have thought? Well I did, but honestly I didn’t think it would come this early. Of course if Ben would have stayed we all know that Maxiell would have been buried on the bench again this season, but he has a legitimate chance to take the last spot and push veteran Dale Davis out. He’s got to work on his defense and try not to get called for chippy fouls but if I had a say I would give him a chance. I’m not one to let young players play through mistakes, but Maxiell has proven he’s as ready as ever.

Maxiell also knows that he’s done everything short of getting a triple double a game to get Flips attention and get a shot at more playing time. Here is the post game interview with Maxiell after the Wizards game where he talks about just that. Video courtesy of FSN Detroit.