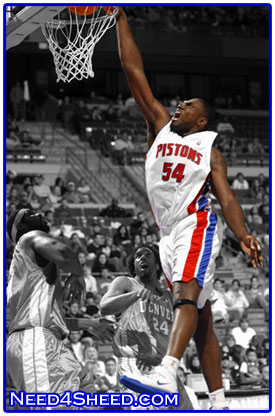 The Pistons got steamrolled by the Denver Nuggets 124-105 Sunday evening. The one bright spot in the lackluster performance was Jason Maxiell’s 21 points, eight rebounds, two steals and three assists. Maxiell played extended minutes when Rasheed Wallace, was hit in the groin early in the first quarter.

Maxiell looks more comfortable on the line, getting his free throw percentage over 50% after working hard on it in the pre-season. It was also nice to see him play with the starters. He just seems to be gelling with everything and everyone in every game he’s played in this season. Let’s just hope that he gets a real chance at some playing time. He’s done more to make himself look ready for quality time than Darko ever did while with the team.

Delfino hasn’t shaken off the cobwebs, going just one for seven in 26 minutes. Amir Johnson and Ronald Dupree each played 15 minutes and scored 15 and eight points respectively.

I must admit I bolted early from the game to catch the Tigers game and because it was quite clear at halftime that the Pistons were going down. One thing I must add, sitting so close to the action, it’s pretty cool to see Earl Boykins out there doing his thing surrounded by a bunch of trees. I love this game.