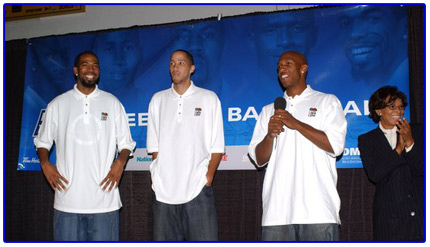 The Pistons opened another Pistons Live, Learn and Play Center at Maddison Middle School in Pontiac today. One of the many that the Pistons have been building for the NBA’s Read to Achieve Program.

Take a look at the banner behind Hamilton, Billups and Prince. It’s nice that they put McDysee in there with the starters, some thought Nazr would take Ben’s place in promotional pictures, but I happen to agree that Antonio should be up their representing the team.

If any of you are in the market for an MP3 player, may I suggest this one that not only has the Pistons logo on it, but its only $25. Best of all it helps the Detroit Medical Center for Breast Cancer Prevention.

Don’t forget the change in times of the Pistons games. They have pushed up the games to accommodate Tigers fans who will be watching the World Series.