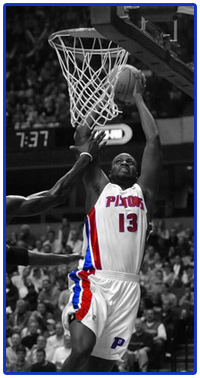 The Pistons beat the Minnesota Timberwolves 112-103 in a home game played in Van Andel Arena in Grand Rapids. Nazr Mohammed had a nice game scoring 20, with six rebounds. Tayshaun added 16 points and seven boards in the win.

Though Mohammed was impressive, it was Amir Johnson, Will Blalock and Jason Maxiell who shined. Johnson had six points, five rebounds and two blocks in 11 minutes, while Blalock had 10 points, five assists and just one turnover in 20 minutes. Jason Maxiell had 16 points and four rebounds in just 18 minutes, four of those points came on monster dunks, something we have become accustomed to this season when Maxiell is on the court.

Here is a nice video highlighting Maxiell, Johnson and Blalock. I don’t like to get ahead of myself but after watching these pre season games, the future looks bright.

We also have a special treat, Need4Sheed reader Jase Songaila was nice enough to share these awesome pictures he took from his courtside seat at the Pistons – Timberwolves game. I am sure you will know what picture is my favorite when you look at them. From what Jase tells me, Sheed was very animated during the game and that I would have been proud. Thanks for thinking of me Jase, the pictures are Sheedtastic.