So I know it was a pre-season and the game didn’t mean much but you have to look at Jason Maxiell’s performance and smile. Maxiell who played just 24 minutes in the Pistons 101-96 win over the Minnesota Timberwolves, took advantage of minute on the court. Maxiell scored 16 points with three rebounds, three blocked shots and one steal. He created all of this shots himself, whether they came from a rebound or him running the floor, or hustling back on defense, he took advantage of every opportunity he had, and delivered. Not only did he hustle, but his dunks where sent with authority. He knows he can crack the rotation and he’s doing everything to make sure he cements his spot. This kid wants it bad and I hope he get the minutes.

Lindsey Hunter sparked the win off the bench with 11 of his 15 points in the final quarter. Flip Murray also had a nice game with 14 points two steals and four assists. Delfino doesn’t seem to have hit his groove yet, he went one for six with just three points.

Maxiell, who was the Player of The Game did a nice post game interview with George Blaha and Greg Kelser. I put the video up, make sure you pay close attention to his monster throw downs, it’s just a sign of what’s to come.

Click Here To Watch The Video Courtesy of TV20Detroit 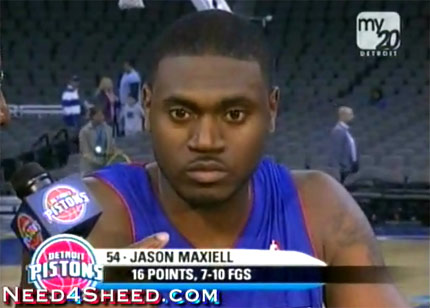