Lance Armstron Has Nothing To Worry About But China Does

It’s only been a few games but I have quickly become annoyed by the biggest, most unpleasant, irrelevant, motor mouth in Western Civilization. After only a few pre-season exhibition games that Bill Walton has worked I realized that I have a long season ahead of me. I used to get a kick out of pointing out his ridiculous statements, but that got old real quick.

A few days ago while watching the Phoenix Suns exhibition game, he made this grandiose statement. “Amare Stoudemire has had a outstanding game and exploded for four points.” Now I don’t know about you but when has four points been described as an explosion? Now I am rooting for Amare’s healthy return but come on, that just sounds idiotic. Then comes this gem from Walton, “It’s great to see Amare out there with a bounce to his step chattering with Steve Nash and looking at the refs like he knows what he’s doing.” Since when didn’t he know what he was doing on court? It was knee surgery not brain surgery you tool. 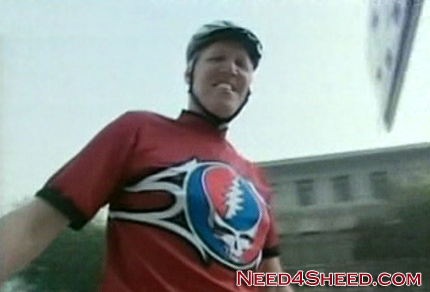 As if we didn’t have enough to complain about when it comes to Bill, I caught this little piece on ESPN while he was broadcasting the game. It’s Bill in bicycle shorts riding his bike through China, with I am sure a bunch of terrified Chinese people wondering if he was a red headed, Grateful Deal loving Godzilla.