I must admit a prior engagement and the Tigers game put the Pistons first pre-season exhibition win over The Miami Heat on back burner for me. I haven’t watched it yet but from the box score it looks like Mohammed had a hell of a game. Sure it’s the pre-season but 16 points, 8 rebounds, 4 steals and two blocked shots sounds pretty good to me. Delfino also added 15 points, six rebounds, three assists, and two steals in the 84-64 win over The Heat.

I will watch the game as soon as I can but I did catch the post game interview with Nazr Mohammed. It’s interesting how in almost every interview I have seen, he make sure he lets everyone know that he’s not Ben. The poor guy is going to have to answer to that comparison his whole Pistons career unless he has a breakout year and squashes the issue outright this season. 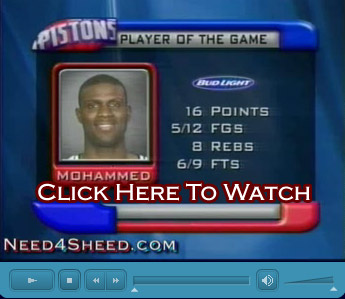