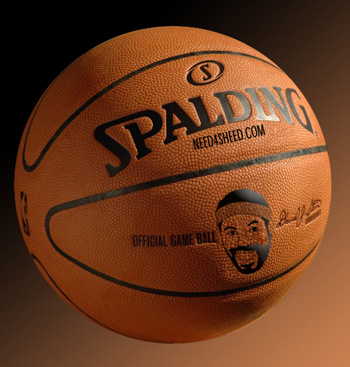 So we can add Rasheed Wallace to the growing list of NBA players that does not like the new NBA ball. It seems as though the old ball was replaced with the new ball because it was supposed to be superior. “The new ball features a new design and a new material that together offer better grip, feel, and consistency than the current leather ball,” says an NBA official. The new ball is made of microfiber composite with moisture management that provides superior grip and feel that is supposed to last throughout the course of a game.

From what players are saying that’s exactly what it doesn’t do. It seems everyone is complaining that throughout the game when the ball gets wet from sweat that it gets very slick and hard to grip. Everyone is calling for lower shooting percentages and higher turnover ratios across the league this season.

“Terrible,” Rasheed Wallace said. “I don’t know why they did it. The thing that (upsets) me about it is, that’s a major part of playing, and you can’t just change it without getting the players’ opinions on the ball before you change it.”

Shaq also chimed in with this little clip. I am pretty sure Shaq is going to try doing Standup as soon as he retires. I think he amuses himself more than anyone else though. 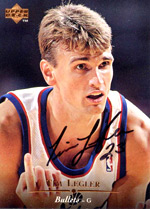 The kicker is David Stern consulted a few former NBA Players (Tim Legler, Dominique Wilkins and Greg Anthony) who tested it for him last year. Now I have no problem with Nique’s opinion but if I need some basketball advise I sure am not going to ask Tim Legler. How does asking Legler to help make a decision that would affect the whole league solidify such a choice? For Christs sake the man’s career average was 7 points per game in 10 seasons. Why wouldn’t the Stern ask current NBA players? Why wouldn’t he get a proven ball handler to test the thing? Hell, why not just ask my four year old neighbor to take it to the park and shoot some hoops, he’s got a mean jumper.

I just want to say that Need4Sheed readers are always on the job. While I was in the middle of writing this post I got an email from Patrick alerting me to this very article. Just in case I am not on the ball one of my readers is. Thanks guys and gals, that just means it’s all Sheed all the time!