This from A. Sherrod Blakely, doesn’t sound promising.

“After watching the guys do some 5-on-5 work this morning, I don’t know what to make of Flip Murray.

I like his game, I really do.But it seems this guy is going to be one of those players that, you’re never really going to know what to expect from him.

He’s a great penetrator, but his shooting touch is very, very – and I mean very – suspect. It’s not that he can’t make shots. In fact, he’s one of the better players out there that can score in bunches, quickly. But when he starts missing, yeah, they come in bunches, too.”Via MLive 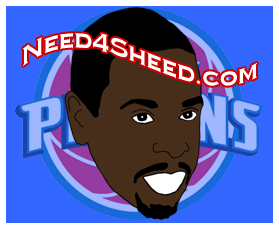 I hope Murray is just a bit rusty from the summer but I am not very fond of players that are hot and cold. I like to know what to expect from a player when he’s on the floor. I can’t say that I have seen Flip play much when he was with Seattle. But I do remember some reagular season games with the Cavs in which he was on fire, but he had a pretty mediocre playoff showing against the Piston in the second round of the playoffs last season. I would like to hear from some Sonics fans on what we should expect from Flip. Maybe Supersonicsoul can fill us in.