Dwyane Wade And Spike Lee Team Up To Sell Shoes 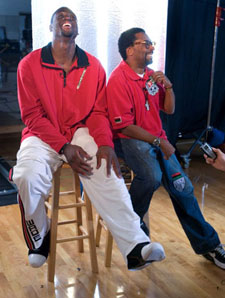 While sorting through my emails for the day I found one that was quite different from the others. This one didn’t have anything to do with the Pistons nor was it some random person thinking I was Rasheed asking me for free stuff. This email came from someone on behalf of Converse letting me know that Spike Lee is directing Dwyane Wade in a series of commercials to launch Dwyane’s new Converse shoe The WADE 1.3.

“Shot documentary-style, the television advertising is created to reveal the inner thoughts of Dwyane Wade and expose the human side of one basketball’s most exciting players. Spike Lee’s vision for the spots is to show an insightful, intimate look at the real person inside the jersey while showcasing his new Converse WADE 1.3 signature shoe.

The television effort is supported by a wide range of print, out-of-home and in-store advertising that is titled “R3ADY” in reference to Wade’s number “ and his attitude toward the upcoming season. The print also reveals the thoughtful side of Wade with close-up images of Wade beside quotes such as: “Most of what I know I learned from my sister.”

That’s cool, I think Wade is a great player and I love Spike but I wondered why I was on the list of people to send the Press Release out to. This is not a Miami Heat Blog and I have pretty much went out of my way to rip on every member of that team that I could. I have to, it’s my job as a Pistons fan. Then it came to me. Maybe it’s because when doing a Google search on Dwyane Wade’s Shoes, Need4Sheed.com its pretty high on the list of results.

Now the resulting page was about Dwyane’s shoes and what I thought they looked like with D-Wade’s choice of black legwear. Needless to say I caught hell for that post, a couple of death threats and some not so kind words about this site and the Pistons. I even hurt little children’s feelings. I saw a post on Wade’s Offical site from a kid telling Wade that “this site called Need4Sheed is making fun of you, you should do something about it. Don’t worry I left a bunch of mean comments on there for you. You’re the best Dwyane.”

So maybe I solved the mystery of the random email or maybe not. Either way I am anxious to see the commercial spots. I’m just hoping the Mars is doing the interviewing. 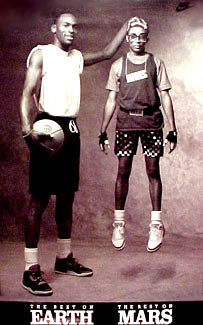 As for Converse, I’m waiting for my free stuff. You can email and I will send out my delivery address. P.S. I don’t really play basketball but I have always been fond of Jack Purcell’s.