This Is Just Pure Entertainment 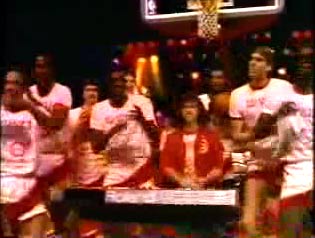 The always hilarious J.E. Skeets of The Basketball Jones saw a small clip of an 80’s Atlanta Hawk Video called Atlanta’s Air Force and was curious to see it in it’s entirety. He couldn’t find it anywhere online so that’s where SLAMOnline took the reins and made Skeets and frankly all of our dreams come true.

Now you would think you could only strike gold once but Skeets seems to have done it again with the Lakers Just Say Know Video.

And to make things even brighter we have The Bust a Bucket Video, where we get a cameo from new Pistons assistant coach Terry Porter.

Thanks for the classics Skeets, you did well!