No I’m Not Rasheed! 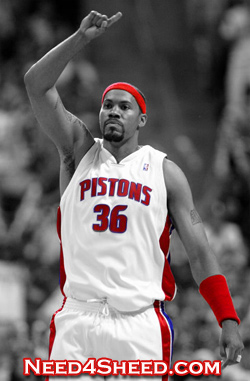 The internet is a funny place. I have never made any sort of declaration or announcement that I am Rasheed Wallace, but that doesn’t stop people from sending autograph requests, threats or cash requests to me on a daily basis.

This statement can’t be truer of Need4Sheed.com’s Myspace Page. You wouldn’t believe how many people actually think that I am Rasheed. I guess people don’t read they just see Need4Sheed and assume that it is Rasheed himself.

I have had to stop replying to all the requests for autographs, jerseys, Air Force 1’s and appearance requests to grade school basketball games. It got to the point that I was answering so many that I wanted to delete the page altogether. Now if you were a semi-intelligent person and you took a look at this blog or the MySpace page you would see that indeed it was not Rasheed Wallace but me, Natalie a semi crazy Pistons fan. All you had to do is search MySpace and see that there are at least eight pages of people claiming to be Rasheed Wallace and any other professional athlete for that matter.

At first I let this go as, “Well it’s just a bunch of young kids that don’t know any better and who have no business being on MySpace anyway.” But it’s not just kids, its grown intelligent adults who think that they are actually speaking to Sheed. I just can’t explain it, it just makes no sense to me at all. I guess people see what they want to see and believe what they want to believe.

Now I just consider it my source of entertainment. I mean if these people actually think it’s Sheed they are talking to you would think they would have something better to say to him than this.

Thanks alot you pretenders! I was a die hard pistons fan who had season tickets and did not miss a single game this year. Do you know how many days I had to call of from work just to see you guys. For what , this, I feel like I wasted seven mnths of my life that I will never get back! It’s time to break up the team, It’s open season with everyone and no one is safe. I won’t watch a single game next year. I guess you guys still enjoy your millions so go fuck yourselves!!!!!!

you should try scroing some more points and making free throws

Hey NEED4SHEED.COM! Give me money.

Will you please start making your 3s!?! I’ve got you on my Fantasy Basketball team, and you’re killing me from downtown!!!

Dunk on for me!

whats up rasheed quit shooting all those 3’s that makes you loose the game i mean come on you lost to the lakers!

Send me some a sighned jersey my address is XXXXXXX Apple, XXXXXX Michigan

Way to talk to Sheed people, I am sure he’s looking for game advice from a kid in his twenties whose idea of participating in sports is playing Beer Pong.

Those are the comments just the way you see them on the MySpace page. People need to stop the internet typing. How hard is it to type out the word you? How lazy has our society become where every word needs to be shortened in order to type it on the screen. Honestly, it takes me longer to try to figure out what the hell the messages say when using internet shorthand. And LOL is used way too much. What’s the point in adding LOL to every sentence? Trust me, it’s not funny.

So if you want a chuckle or want to be Need4Sheed’s MySpace friend, you are more than welcome. Just remember I can’t tell Rip that you think he’s hot, I can’t send you free shit, I can’t stop taking 3 pointers, I’m not going to put you in my “Top 8” and most of all I am not going to COMMENT ON UR NEW PICS.