Cavs PA Announcer Fires Back After Getting The Boot

Ronnie Duncan the Cavaliers PA announcers contract was not renewed for this season and he’s firing back at Dan Gilbert and the Cavs Organization. He’s upset about losing his job and he can’t understand why Cavs broadcaster Michael Reghi was fired and replaced with Pistons broadcaster Fred Mcloud.

Well we all know that Dan has been trying to turn the Cavs into the Pistons. I even counted some of the similarities last season, but Duncan is actually telling us that Gilbert himself tried making him into a mini John Mason.

“They made me a robot,” Duncan said. “Dan (Gilbert) would interject things during the games, like ‘Cleveland basketball’ (sung to the tune of ‘Detroit basketball,’ which was Mason’s signature call). They wanted Mason. Maybe Dan should have bought the Detroit Pistons.” 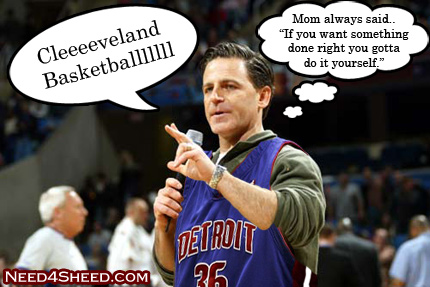